Alfred Hitchcock planning sequel to The Birds featuring bureaucrats from south Florida and helpless property owners in the role made famous by Tippy Hedren. 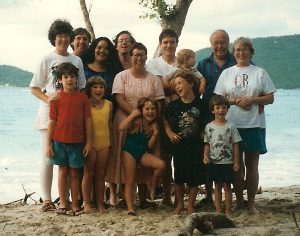 In the Ganson case, government officials in the City of Marathon, Florida, decided that Gordon and Molly Beyer, a married couple who owned a 9-acre piece of property in the Florida Keys, lost all rights to develop on the nine acres – an island known as Bamboo Key – because the island made a fine bird rookery. The officials designated the Key (along with other property in the Keys) to be environmentally sensitive and thus on behalf of all Floridians cut the property off from development. When those officials made that decision, they further decided they did not have to pay the Beyers for the take despite having rendered Bamboo Key uninhabitable (well, except for birds). Instead, the officials awarded the Beyers a kind of credit that they could ostensibly sell or use themselves (by buying additional land) to seek a permit elsewhere in the Keys on lands not as environmentally sensitive as the Key. But the credits, called ROGO points, are basically valueless because there is no guarantee the points will ever allow them or anyone else to develop or build a home in the Keys. If that sounds unfair to you, then join the club.

Pacific Legal Foundation believes that Marathon’s actions amount to a total taking of the Beyers’ property. Although the government may engage in zoning schemes to protect the environment, those schemes must pay landowners who lose virtually all their rights in their property because of the zoning scheme. The scheme benefits all, thus all should pay a little, rather than force the landowner who lost his property (in this case, the Beyers) pay for all of us.

The case presents two issues that have been left open by the Supreme Court since Justice Scalia identified them in a previous Pacific Legal Foundation case known as Suitum v. Tahoe Regional Planning Agency. Those questions are:

1) whether a government can take a landowner’s property lock, stock, and barrel (a Lucas total taking) yet avoid Fifth Amendment liability by leaving the property in the landowner’s name and offering the landowner some nonmonetary credits (like the transferable development rights (TDRs) in Suitum) with indeterminate value as “just compensation” for the take; and

2) whether, in the event of a Penn Central partial taking, nonmonetary credits can allow the government to avoid a finding of a partial take because the credits give the owner economic value in the property, or whether those credits only get calculated in determining whether just compensation has been made for the take.

In Suitum, Justice Scalia concurred in part and answered the above questions in an opinion he authored on behalf of three justices – Scalia, Justice Thomas and Justice O’Connor. He answered both questions as you would expect: a total take should be justly compensated with money; and in the event of a partial take, nonmonetary credits like TDRs only deserve consideration on the just compensation side of the equation. Although the credits may be valuable, they are valuable in and of themselves — they do not give value to the real property at issue, which has been rendered valueless. Thus the credits must equal just compensation to be a constitutional tool for regulating the use of real property.

These questions matter because hundreds of local and regional governmental agencies throughout the nation have used schemes similar to Marathon’s to effect takings of real property without paying just compensation for the take, as the Fifth Amendment requires. Instead, the agencies argue that the nonmonetary compensation amounts to “economic use” for the real property. When courts accept these arguments, they allow these local governments and agencies to skirt the requirements of the Constitution as written by our Founding Fathers.

We suspect that the nine justices know Justice Scalia was right on both of these issues when he spoke to them in his Suitum concurrence. Thus, we bring the Beyers’ case to the High Court optimistic they will accept the case for review and hopeful that they will reverse the lower court’s decision to allow Marathon to take the Beyers’ property without paying just compensation. In doing so, the Court will also set a precedent that landowners across the nation will rely upon when facing a governmental land grab where the government refuses to pay for the take. A win in the case would do justice for the Beyers, who started this legal fight two decades ago and in the years since have both passed (thus the case is now brought by Charles Ganson, a representative for Molly’s estate and the couple’s children and grandchildren). The Court will consider our petition later this year. We thank the lawyers at Cato Institute, Southeastern Legal Foundation, and NFIB Small Business Legal Center for standing with us in our challenge to a heavy handed south Florida government.