ACLU gives up on free speech (we are still fighting) 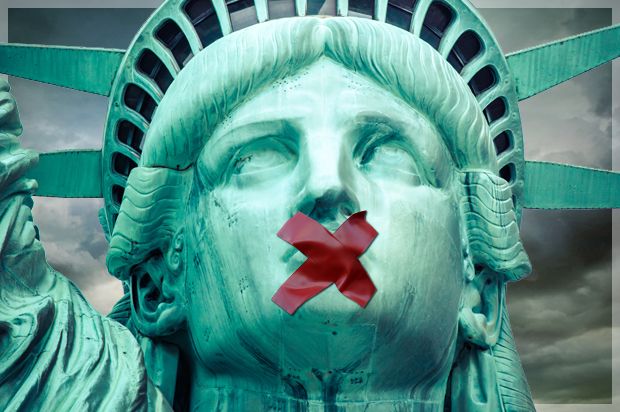 “Those who won our independence believed that the final end of the state was to make men free to develop their faculties, and that in its government the deliberative forces should prevail over the arbitrary. They valued liberty both as an end and as a means. They believed liberty to be the secret of happiness and courage to be the secret of liberty.” These words, written by Justice Brandeis in 1927, still hold true today. The right to free speech contained in the First Amendment to our national Constitution is one of the most important civil liberties we possess, not only for individuals but for society as a whole. Without the ability to speak our minds on important political and social topics free from the fear of government interference or punishment, we cannot communicate, deliberate, and effectively participate in the democratic arena or marketplace of ideas.

This truth was well known to the Framers of the U.S. Constitution.

But this vital freedom does not come without a related cost. The cost of living in a society where we are free to speak our minds without retribution is having to allow your neighbor the right to do the same. And while we might not always like what our fellow Americans have to say, while we might be outright offended, traditionally Americans have been willing to endure even the most reprehensible speech as a means of preserving the freedom of all. However, there have been instances throughout American history where circumstances have appeared so dire, or speech to reprehensible, that the government attempted to limit the freedom of speech under the First Amendment.

But the government cannot be trusted to check itself when it comes to abusing its own power. In those instances when free speech was threatened, someone had to stand up for the rights of the people and fight back. For many years this task fell to organizations like the American Civil Liberties Union (ACLU). No matter how seemingly offensive or repugnant the underlying expressed ideas, the ACLU knew that a threat to any one individual’s speech is a threat to the speech rights of every American. The more possibly offensive the speech, the greater protection it requires.

In a stunning turn of events, it was revealed today that the ACLU has abandoned its former commitment to defending free speech. In a leaked memo laying out guidelines concerning future case selection and “Conflicts Between Competing Values or Priorities,” the ACLU announces that henceforth it will consider the possible subjective offense that might be generated in certain “marginalized” groups by protected speech before it decides whether to accept a given case. According to the guidelines: “Speech that denigrates [marginalized] groups can inflict serious harms and is intended to and often will impede progress toward equality.” Instead of taking a principled stand on behalf of the rights of all Americans, the ALCU will henceforth select free speech cases based upon the “impact of the proposed speech and the impact of its suppression.” This is not how the First Amendment was intended to operate.

My or your ability to speak or express ourselves freely does not depend on how our expression make anyone else feel. A principled defense of free speech requires commitment to the First Amendment, not identity politics. And a principled defense of the free speech is needed now more than ever. Intolerance for differing viewpoints has reached a fever pitch in this country. You can see it everywhere you turn, from college campuses, to sporting events, to social media platforms. And while these examples do not all concern action on the part of the government, and hence do not implicate the First Amendment (which only applies to “state action”), they are reflective of a society in need of principled leadership on free speech issues.

While we cannot forecast with complete certainty which cases we can accept and which we must decline, there can be no doubt that Pacific Legal Foundation has been and will continue to be on the cutting-edge of the fight for First Amendment freedoms. Just last week we won a landmark First Amendment victory at the United States Supreme Court that will help to protect the political speech rights of all Americans for generations to come. And we are just getting started. Whether you want to wear a “Tea Party” or “Me Too” tee shirt to your local polling place on Election Day, start your own speech-related business, tell the public about your products or services, communicate truthful information, or even just paint your house the way you like: Pacific Legal Foundation has your back.

Frederick Douglass once wrote that “Eternal vigilance is the price of liberty.” We are at a crossroads in the battle to protect free speech in this country. As long as government exists, there will always be efforts to curb individual speech and expression. But as long as PLF exists, we will continue to fight on behalf of the First Amendment, upon which so many of our other liberties depend.