Big win for economic liberty in the Big Sky State 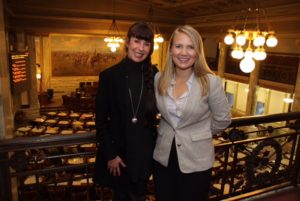 Thanks to PLF’s lawsuit, Montana Governor Steve Bullock signed SB 396 into law on Friday, which gets rid of the state’s Competitor’s Veto law and allows PLF client Tracie Pabst to start a taxi company without asking her competitors for permission first.  The bill is a big win for economic liberty, as it also allows ride-sharing companies like Uber to operate so long as they abide by certain insurance requirements.

SB 396 was introduced just after PLF filed a constitutional lawsuit on behalf Tracie Pabst earlier this year.  Tracie is an entrepreneur based in Big Sky, Montana, and she previously operated a shuttle business in the state, as well as transportation companies in Texas and New Mexico.  Tracie is obviously qualified to run a taxi business; her previous shuttle company completed 170,000+ rides over 1.5 million miles accident free and without a single traffic violation.  Because the roads in Montana can be treacherous, she wants to bring her safe services to her hometown, but when she investigated getting a license, she discovered she’d have to ask her competitors for permission first.

Under the former Montana law, existing transportation businesses could protest and testify against applications for new licenses.  Such a protest subjected the applicant to a mandatory government hearing in which the applicant was forced to prove to the government that there is a “public need” for the business, that no existing carriers can meet that need, and that the new service will not harm the existing carriers.  To sum it up, the law allowed existing businesses to protest an application for a new business—and required the state to deny that application—simply because the new business would compete.

As Tracie told us, “When I have to prove that if I compete with someone, that I won’t do them any financial harm—in other words, I’m not going take any of their business away—well, I’ll swear on a stack of Bibles right now: my goal is to take their business away.  That’s called free trade, free competition. That is what this country is all about.”

PLF sued, and SB 396 was introduced soon thereafter.  You can read and watch my testimony on the bill here.  Now that Governor Bullock has signed the law, Tracie is free to pursue her right to earn a living in her hometown free of explicitly anti-competitive burdens.

Tracie’s and PLF’s victory in Montana comes on the heels of its win in Kentucky, where just last year a Federal judge struck down a nearly identical law for moving companies.  Two other states—Oregon and Missouri—also passed legislation getting rid of their Competitor’s Veto laws following PLF lawsuits.

PLF also has a lawsuit pending in Nevada on behalf of husband and wife entrepreneurs Ron and Danell Perlman, and father and son moving team Steve and Patrick Saxon.  That state is also considering getting rid of its Competitor’s Veto law.  If Nevada doesn’t repeal, PLF will continue to fight that law in the courts, because Competitor’s Veto laws are not only unfair, they are unconstitutional.