Legislating through friend of the court briefs

As many Pacific Legal Foundation employees have written about before, the power of administrative agencies has increased greatly over the last century. Many Americans are now subject to rules adopted not by elected officials, but by unelected bureaucrats in the 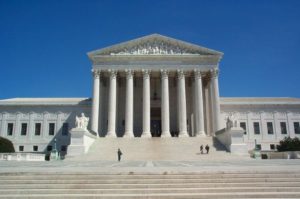 “fourth branch of government.” Even worse, it is common practice for courts to defer to agencies’ interpretations of the law, even though it is the judiciary that has the constitutional power to interpret laws.

This acquiescence to agencies once again reared its ugly head in a recent case out of the Third Circuit, E.I. DuPont De Nemours and Company v. Bobbi-Jo Smiley. At issue is the interpretation of the Fair Labor Standards Act. DuPont pays its employees for the breaks they take during the shift. However, DuPont does not pay employees for the time they spend before and after their shifts donning and doffing their uniforms and briefing the new shift about the work they just completed.

Some employees sued DuPont, arguing that the Fair Labor Standards Act requires DuPont to compensate the employees for the activities that take place before and after an employee’s shift. DuPont responded that the time they pay for employee breaks (which it is not required to pay) offsets any extra work that takes place before and after a shift. Therefore, DuPont argued, the Fair Labor Standards Act does not require it to pay any extra compensation.

This sounds like a job for a court: there is a dispute about the meaning of a statute, and courts interpret statutes. Unfortunately, the Third Circuit disagreed. The court deferred to the Department of Labor’s understanding of the Fair Labor Standards Act. Even worse, the Department of Labor did not adopt a regulation interpreting the Act, nor did it have a longstanding interpretation of this aspect of the Act. Instead, the Department of Labor stated its opinion for the first time in an amicus curiae (or friend of the court) brief.

DuPont filed a Petition with the Supreme Court of the United States, asking it to review the case. Yesterday, PLF, on behalf of itself and the National Federation of Independent Business Small Business Legal Center, filed an amicus brief urging the court to take the case. PLF and NFIB specifically asked the court to take the case to resolve the ongoing issue of courts deferring to agencies in the interpretation of statutes.

This case reflects the dangers of continued judicial deference. The Department of Labor stated its interpretation of a law for the first time in litigation. Furthermore, the Department was not even a party to the case, it just filed a brief with the court. Yet the Department’s interpretation is now the law, at least in the Third Circuit. If this practice continues, then agencies will be allowed to adopt new regulations without ever informing the public of its position (at least before it’s too late). Hopefully the Supreme Court will review the case and will start stemming the tide of judicial deference to agencies.