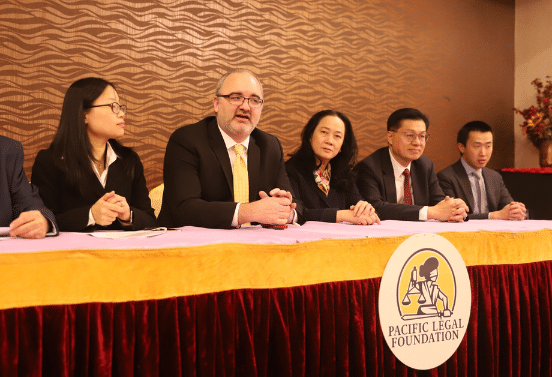 Wai Wah’s op-ed reveals the ultimate problem with racial tinkering. Whether done with overt racial quotas or more covert changes to admissions procedures, attempts to engineer a racially diverse outcome always end up treating applicants differently because of the color of their skin. Today, some administrators at elite universities and policymakers in the nation’s cities believe there are “too many” high performing Asian-American students. In the future, administrators might wield the same arguments against another racial group, just as they did against Jewish applicants a century ago. No individual or group should have to bear this burden.

PLF is committed to the principle of equal opportunity under the law. As the first Justice Harlan wrote in his famous dissent in Plessy v. Ferguson, “[o]ur constitution is color-blind, and neither knows nor tolerates classes among citizens.” That’s why PLF represents CACAGNY in a constitutional challenge to New York City’s plan to racially diversify the specialized high schools by setting aside 20 percent of the seats at each school for participants in a pre-existing program for low-income middle school students, known as the Discovery program. The City’s plan to earmark 20 percent of seats for Discovery participants, together with changes it made to Discovery program eligibility, is transparently intended to reduce Asian-American enrollment at the specialized high schools until de Blasio and Carranza can convince the state legislature to implement a plan that distributes specialized high school seats equally across City middle schools. An independent estimate noted that Asian-American enrollment at the eight schools would fall by nearly half under that additional plan, which requires approval from the state legislature and the governor.

We have no problem with the Discovery program itself. It was intended to help poor kids whose test scores are just below the cutoff get a chance to succeed at the specialized high schools. It should continue to do that. But we object to the way the City has gerrymandered eligibility for the Discovery program to exclude students at many heavily Asian-American middle schools, even if the individual students are economically disadvantaged. By changing the Discovery criteria to only consider the average economic situation of students at a particular school, rather than each student’s economic situation, the City is admitting that merely expanding the size of Discovery would not accomplish its goal, because two-thirds of Discovery students in recent years have been Asian American. In the City’s view, manipulating the Discovery program is necessary to make sure that poor Asian-American children won’t be too “overrepresented” among Discovery students. That is unconstitutional racial gerrymandering.

PLF represents CACAGNY, along with the Parent Teacher Organization at Christa McAuliffe Intermediate School, the Asian American Coalition for Education, and parents Phil Wong, Chi Wang, and Yi Fang Chen. We are appealing to the United States Court of Appeals for the Second Circuit to stop the changes to the Discovery program from continuing in 2020.

Hartford Courant: Why Connecticut parents are challenging racial quotas in our kids’ schools March 04, 2019 I By PLF