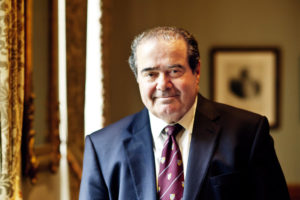 Justice Antonin Scalia was one of the most influential Justices in Supreme Court history. During his 30-year stint on the Court, Justice Scalia was a giant figure in the conservative legal movement. Indeed, his ideas have profoundly influenced my legal education and professional development.

Justice Scalia’s lively opinions made conservative legal ideas accessible to law students and young attorneys like myself. Future law students will read his opinions and be influenced by some of the most powerful conservative arguments. Justice Scalia was an artist—as one of the greatest writers in the Court’s history, Justice Scalia guided readers through difficult cases in a concise and powerful manner. His unique metaphors made his opinions a joy to read. Even when I disagreed with a Justice Scalia majority opinion or dissent, I could be sure that I read some of the strongest arguments for that position.

As a recent law school graduate, Justice Scalia has been one of the most profound influences on my intellectual development. Through his witty and powerful opinions, Justice Scalia will continue to influence future lawyers for many generations.