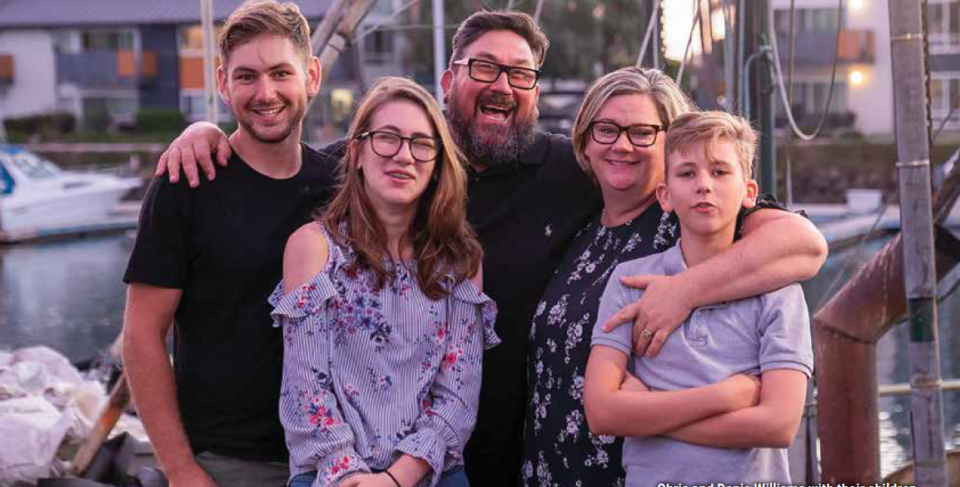 “We’re doing everything we’re supposed to do, but government is moving the goal posts on us anyway.” — Chris Williams PLF Client

From the first time Chris Williams climbed aboard his dad’s swordfish boat, he was hooked.

“It’s like an odyssey, literally when you go out, face the elements, and you come home safe,” he explained. “Swordfishing evokes a pioneering spirit.”

Forty years later, Chris has transformed his father’s swordfishing hobby into a commercial business and way of life. The swordfish he catches off the California coast are his family’s main source of income; their fish sell throughout the state and at his family’s small market in Ventura.

“You’re providing meals for thousands of people. That’s always a great feeling,” said Chris. “But it’s not the easiest way to make a living.”

His wife, Dania, agreed. “He’s throwing it all out there when he throws that net over the side. He’s putting everything at risk every time he does it. Life, limb, and property.”

But now the Williamses face a new threat that’s stronger than any ocean storm: government rules that jeopardize their livelihood and the entire swordfishing industry.

Chris is one of about 20 swordfish permit holders in the state, many of whom run small, family-owned businesses that go back generations. These fishermen share a deep love for the ocean and the life it supports. For years, they’ve worked with government regulators to lessen the chances that other sea animals might get caught in their nets. Over that time, officials implemented legal protections such as seasonal closures and equipment and observer man- dates for boats.

“We really work our tails off to do the right thing,” Chris said.

Today, as swordfish is one of the most abundant fish along the West Coast and a very popular seafood, it would seem the collaboration was worth the effort. But apparently, it’s not enough for the government.

A new state law and a new federal rule threaten to thoroughly wipe out commercial swordfishing. California’s law would phase out all state permits for drift gillnets—the only economically viable means of catching swordfish. The federal rule would halt an entire fishing season if the wrong type of animal ends up in nets meant for swordfish.

These measures purportedly aim to further prevent accidental captures of other animals in drift gill nets. But given the success of existing safeguards to preserve sustainable swordfishing, Chris sees the new rules as setting him up for permanent failure.

“For 20 years of my life I’ve had federal observers on my boat watching everything I do. I’ve gone to meetings, filled out log books, and complied with all the rules and regulations. We even went through a huge fleet reduction,” Chris said. “The mammal bycatches are almost zero. We’re doing everything we’re supposed to do, but government is moving the goal posts on us anyway.”

Once fully enacted, these rules would destroy the freedom of responsible sword- fishermen to earn a living. For the Williamses, losing their business would put their kids’ future at stake.

“Our children have spent their whole lives involved in our family business so they can either have a fishing career, pay their way through college, or one day start their own business,” said Dania. “If we lose our business, they not only lose the future we’ve all worked so hard to build, but they can’t even sell our gear or equipment because government made them worthless.”

In turn, the sustainably caught domestic swordfish supply will disappear, leaving foreign markets as the only source of swordfish for American consumers— a source with much lower standards of environmental accountability and oversight.

To preserve an industry that’s fed Californians and sup- ported their livelihoods for generations, and to restore the freedom to earn a living, Chris and Dania have joined several other sword- fishing families who are fighting back with cases in state and federal courts.

“As a tradition throughout the world, fishing is ancient and honorable. Like any other livelihood in the United States, fishing is protected by the Constitution,” said PLF senior attorney Damien Schiff. “We look forward to reeling in the defective and unconstitutional rules at both levels of government that deprive California’s fishermen of the right to earn an honest living.”

The Williamses are also angling for victory—inside and outside the courtroom.

“I would love to keep fishing and teaching my two boys and my daughter how to provide this fish for people who can’t go out on boats and fish for themselves. And winning would obviously settle a lot of uncertainty for our kids’ futures,” said Chris. “But winning would also send a huge message to government bureaucrats that people aren’t expendable parts of their schemes.”

The Constitution ensures the rights of hardworking Americans to earn an honest living free of unnecessary state and federal government laws and regulations. Government cannot continuously move their regulatory objectives to destroy someone’s livelihood or their whole industry.

California swordfishermen should have the economic freedom to keep their longtime family businesses and not see their livelihoods forcibly ruined by unreasonable government interference. By standing with Chris and Dania Williams, you empower all Americans to fight back against bureaucratic abuses by government at all levels. Thank you!