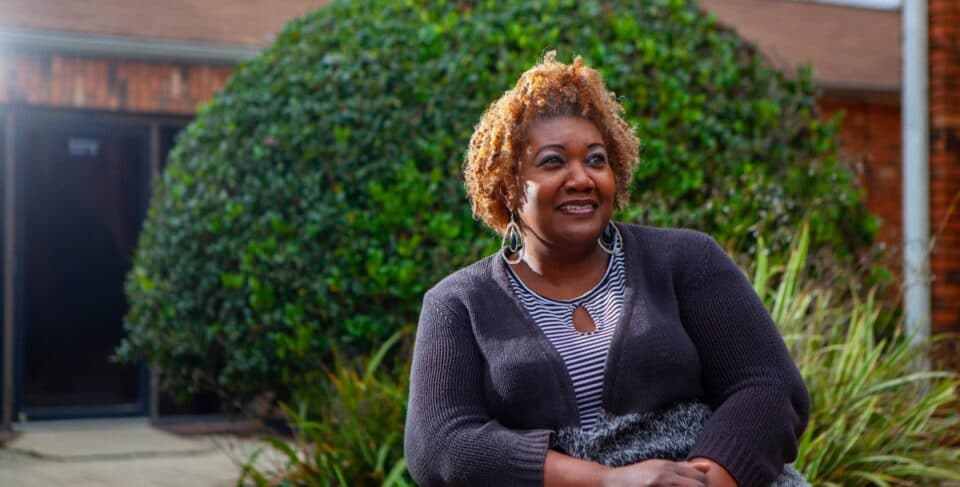 “Even if 1,000 programs were already out there, I should still have the right to open up and do my best to offer these children some-thing better.”

“I’m Ursula Newell-Davis, and I want to change lives, on child at a time.”

But the longtime New Orleans social worker wants to do it on her terms. She has the education, the experience, the passion, and her community has the need.

She also has the plan: an in-home program that teaches life skills to at-risk and special needs children while providing respite to their caregivers.

But when Ursula sought the final item she needed—a license—state regulators denied her license, her opportunity to help others, and her rights.

Ursula’s business aspirations naturally evolved from more than 20 years as a social worker focused on teenagers who have mental health issues and cognitive disabilities.

Too many of these youths were written off by schools and already in the juvenile court system by the time they entered her orbit.

“It became clear to me that something important was missing in these children’s lives long before their teen years that steered them to the wrong crowds and criminal activity,” she explains. “Many of these troubled youth grew up in low-income households whose parents or caregivers worked odd hours, so kids were alone after school and at night.”

Nor do these children learn basic life skills like taking a shower or fixing a meal. So, Ursula started Sivad Home and Community Services, LLC and created a program to teach independent skills to children beginning at age six while giving overwhelmed caregivers a few hours’ respite.

Ursula knew from years of navigating government red tape for other mental health facilities that she would need a Home and Community-Based Services provider license, a process that first requires approval from the Louisiana Department of Health.

Similar to laws in 35 other states called “Certificate of Need laws,” Louisiana’s Facility Needs Review puts the burden on applicants to prove a “need” for their services.

Most importantly, Ursula firmly established that community needs for her proposed services are not being met. She explained that her service area has a population of around 400,000 people but only five providers, two of which are within her ZIP code. She even examined Medicaid billing data for existing licensees and found they don’t actually perform respite services. Instead, they provide other, higher cost services allowed under different licenses.

“It’s just not worth the hassle for them,” says Ursula. “But it is for me. It doesn’t take long for my clients to realize this lady is not just about the money. It’s about making a difference.”

None of this mattered to state health officials. They denied Ursula’s application and her opportunity to earn an honest living by providing a critical service to her community.
Ursula was not alone. The state sent the same denial letter to 86 other applicants who hoped to launch similar services in 2019 and 2020.

“The health department only sees what’s on paper, not what’s in my heart. The government only cares about the number of licenses in my ZIP code, not their use,” insists Ursula “The number of other providers shouldn’t matter either. Even if 1,000 programs were already out there, I should still have the right to open up and do my best to offer these children something better.”

Moreover, decades of research show that laws like Louisiana’s do more harm than good when it comes to health and safety. These regulations artificially reduce supply of and access to necessary services, drive up costs, and worsen outcomes. In fact, the government-sanctioned layer of protection against competition typically makes existing businesses the biggest beneficiaries of these regulations.

“The Constitution protects the right of Ursula and all Americans to earn a living free of irrational and arbitrary government restrictions and pro- protectionism,” says PLF senior attorney Anastasia Boden. “The state cannot simply deny some people economic opportunity to insulate incumbent businesses from new competitors like Ursula.”

It’s even more egregious when the well-being of vulnerable children and struggling families hangs in the balance. So, Ursula is fighting back. Represented by PLF and Louisiana’s Pelican Institute for Public Policy,

Ursula is defending her right to earn a living and stop government from deciding who can and cannot enter the market.

A win would vindicate her constitutional right to earn a living and create opportunities for others to join her in helping families in need.

“This crony process needs to stop,” declares Ursula. “If not me, then who? If not for me, for every kindhearted, ambitious person who follows in my footsteps. Nobody should be told they don’t have a right to follow their passion and try to earn the most fulfilling living possible.”

The Constitution protects Americans’ rights to earn an honest living free of irrational or arbitrary government interference. The government cannot burden this right for the sole purpose of insulating entrenched industry insiders from competition.

Economic freedom allows entrepreneurs like Ursula Newell-Davis to pursue their vocations and provide much-needed services to vulnerable populations. Your investment in PLF empowers Ursula to challenge Louisiana’s crony-driven limits on entrepreneurship and set an example for states that continue to harbor such laws. Thank you!