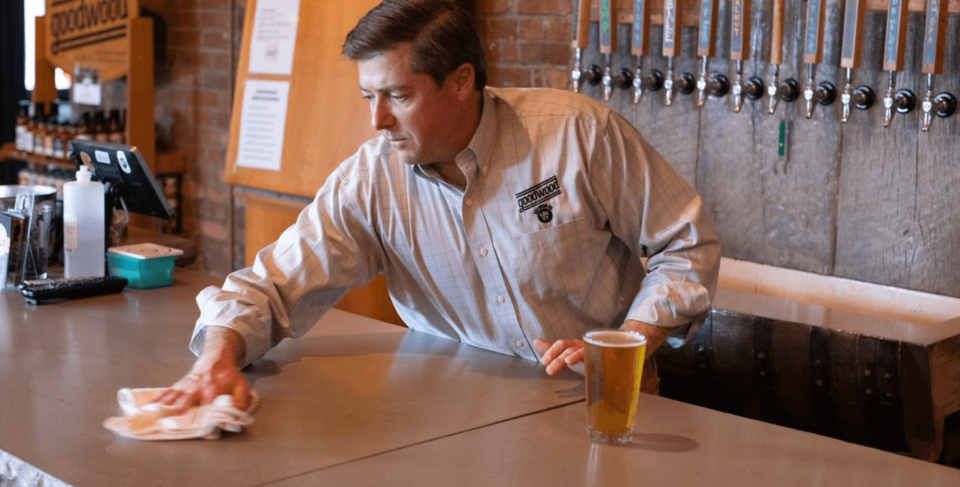 Restoring safeguards on the separation of powers has required PLF’s forceful pushback on two critical fronts: courtrooms and state legislatures.

Ted Mitzlaff’s career took a sharp turn in 2005, when he went from running a large, successful chemical cleaning company to a small, failing brewery in Louisville, Kentucky.

Some might balk at the thought of leaving a business that served food and drink giants Tyson, Perdue, and Anheuser Busch to rescue a struggling local beer business.

Not Ted. “I’m a glutton for punishment,” he quips, referring to the grind of building Goodwood Brewing Company into a 16-state craft beer and bourbon brand.

He never dreamed his self-inflicted hard work would pale in comparison to the punishment of government overreach.

But the pandemic proved too great an opportunity for government at all levels to trample individual liberty under the guise of protecting public health.

In Ted’s case, Kentucky Governor Andy Beshear enacted scores of emergency orders so arbitrary and fluid that businesses—restaurants and breweries in particular—struggled to understand them, much less comply.

And when New York Governor Andrew Cuomo’s orders finally allowed off-Broadway actress and theater manager Catherine Russell to restart performances, she couldn’t even seat the same number of people as church services held in the same room—on the same day.

Like all conscientious business owners, these folks understand some government rules are necessary in non-pandemic times. And like all concerned Americans, they didn’t question initial emergency orders aimed at flattening the curve and preventing hospital overload.

As months passed, however, we learned how best to respond to COVID and vaccines hit the market at lightning speed.

For most of America, the emergency expired long ago. Logically—and constitutionally—so should emergency powers.

Unfortunately, the logic of “no more emergency, no more emergency powers” has yet to take hold in all states. Many governors still cling to powers their legislatures never approved and thus, they no longer have.

Kentucky has emerged as ground zero in this separation of powers tug-of-war. In February, following guidance from PLF’s model legislation, the General Assembly added a 30-day limit to the governor’s emergency powers. Any further extension also requires legislative agreement.

Governor Beshear refused to acknowledge new limits on his powers. First, he refused to work with lawmakers to extend the orders he’d issued over the past year. Then he sued the legislature to get the new laws overturned. And though his orders expired in March 2021, his enforcement did not, meaning business owners like Ted continue to pay the price.

Left unchallenged, such overreach risks are becoming commonplace. It’s easy to imagine, for example, a governor declaring climate change an “emergency” to impose policies that would never pass legislatively.

Restoring safeguards on the separation of powers has required PLF’s forceful pushback on two critical fronts: courtrooms where our clients are fighting to restore their rights through litigation, and in state legislatures to restore the proper balance of power through lawmaking.

Represented by PLF free of charge, Ted and two other restaurant owners challenged Governor Beshear’s now unlawful enforcement restrictions with this simple constitutional principle: the governor, like everyone else in Kentucky, must follow the law—even laws he doesn’t like.

Likewise, Crystal, Catherine, and other small business owners across the country have taken to the courts—with PLF’s help—to rein in their states’ abuse of executive authority.

Florida, Ohio, and Pennsylvania, where voters passed a constitutional amendment despite efforts by the governor’s staff to sabotage the ballot language.

Kentucky, in particular, became a proving ground for PLF’s brand of relentless constitutional jab-and-cross. From the state capitol where lawmakers overwhelmingly passed PLF-inspired bills to the June showdown between Ted and the governor at the state supreme court, the Bluegrass State is serving as the nation’s bellwether of balance in the battle to rein in emergency powers abuse.

“Governor Beshear does not have the power to both make and execute the law in Kentucky,” explains Daniel Dew, PLF’s Legal Policy Director. “Ignoring clear legislative limitations on his powers rejects the fundamental principles of constitutional government and the rule of law.”

Governors can neither ignore nor write laws

The Constitution allows governors to take on special emergency powers during a crisis. But those powers are created and granted by legislators, are subject to limits, and cannot continue indefinitely. Governors can’t simply extend and expand the boundaries of their powers. Not even during a pandemic.

The Framers ensured that each branch of government must adhere to the constitutional separation of powers, which is the main protector of individual liberty. Your investment in PLF empowers everyday Americans to fight back against government bureaucrats who refuse to relinquish newfound emergency powers. Thank you!