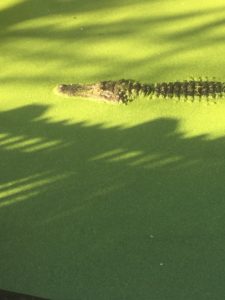 I was told this was a Florida property regulator.

When the Florida Legislature enacted the Bert J. Harris, Jr., Private Property Rights Protection Act, it explained that the law provided a remedy to landowners unfairly affected by government regulation on their property. The law says:

An experienced contractor, Tom Finney decided to mine his own property for sand
and fill to save money on septic work costs where he needed fill dirt for the jobs. He
asked DeSoto County government’s Planning Department for instruction on where to purchase property in the county for that purpose, and the County told him where to find it and then staff approved the site he then bought on their say-so.

Finney then formed a partnership with a competitor, and they created P.I.E., LLC (Partners In Excavating). P.I.E. purchased the property for $1.25 million. In its condition at the time of the purchase, that’s what it was worth; but as an excavation site, it was worth $3.3 million. P.I.E. then invested over $250,000 to survey the property, retain an engineer, secure a water management district permit, and ultimately to submit a complete excavation permit application to DeSoto County.

County staff accepted the excavation permit application, deemed it complete, and advised P.I.E. that its application complied with the County’s planning and zoning rules. The County Planner, County Attorney, County Engineer, and County Manager all recommended to the County Commission that it approve the permit with conditions. Meanwhile, the County staff neglected to mention to P.I.E. that they were re-writing the excavation ordinance to eliminate the possibility of a mine this size in the A-5 zone.

The County Commission reviewed the application and, against the staff recommendation, rejected the permit application with a generalized complaint about the “health, safety, and welfare” of DeSoto County. Two months later, the County passed the revised excavation ordinance that rendered P.I.E.’s plans for the property a dead letter.

P.I.E. lost over two million dollars in value when the DeSoto County Commission rejected the staff recommendation and denied the permit.Doing so violated the Harris Act– in fact, the Legislature wrote the Harris Act to remedy this very situation. If the Harris Act does not apply, then one wonders when it would ever apply. The trial judge found that it did not apply, but PLF respectfully disagrees.

This week, PLF’s Atlantic Center filed its initial brief with Florida’s Second District Court of Appeal to challenge the trial judge’s decision. We look forward to the appellate court hearing the case on the merits.