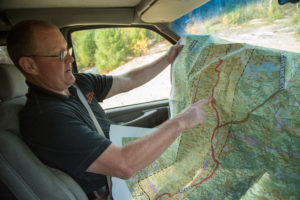 Earlier this week, Pacific Legal Foundation filed its principal brief on behalf of the Marquette County (Michigan) Road Commission in the Sixth Circuit Court of Appeals in Cincinnati. In this appeal, we represent the Road Commission as it takes on the federal government and its Environmental Protection Agency. The Road Commission intends to build a needed road project for its community in the Upper Peninsula of Michigan. The EPA won’t allow it to do so, for reasons both arbitrary and capricious.

The road project has its roots in a discovery that occurred eight years ago. A large deposit of nickel and copper was discovered in an area now known as the Eagle Mine. The mine is only 22 miles from the nearest refinery as the crow flies, but the trip is nearly three times as long via existing roads. The proposed solution was to construct a new county road, a direct path from the mine to the mill. That would allow the trucks to bypass busy city streets and college students at the nearby state university that sat along the existing roads between the mine and mill.

Elected officials broadly support the project, since they see it as critical for the community’s safety and environmental health.

But the EPA does not care. Even though the state’s Department of Environmental Quality intended to approve the new road pursuant to its authority to do so under the Clean Water Act, the EPA vetoed the state’s permit with vaguely stated objections about dangers to the environment. Agency officials never provided the kind of details that would allow their concerns to be objectively assessed, but they stuck to their objections tenaciously.

Ironically, the EPA is blocking a project that would benefit the environment. The new road would lead to fossil fuel savings, and much less carbon dioxide emitted from the trucks. And the public-safety arguments are likewise compelling. None of this matters to the federal leviathan. And what is most stunning is the EPA’s insistence that the Road Commission has no right to challenge its decision. It argued below that the courts could not even hear the case, and the lower court bought this argument.

PLF thinks differently. This case is not unlike our Sackett and Hawkes cases, where the EPA and Army Corps of Engineers similarly argued that their outrageous decisions were not subject to judicial review. We won those cases when the Supreme Court agreed with us that these agency decisions were subject to judicial review. We plan to win this one, too.

Although PLF represented government entities at times during its early years, in more recent times PLF generally has not done so. But here the EPA has so wronged this local government that we had no choice but to become involved and right this wrong. We look forward to the day the Road Commission breaks ground on what it will call County Road 595.