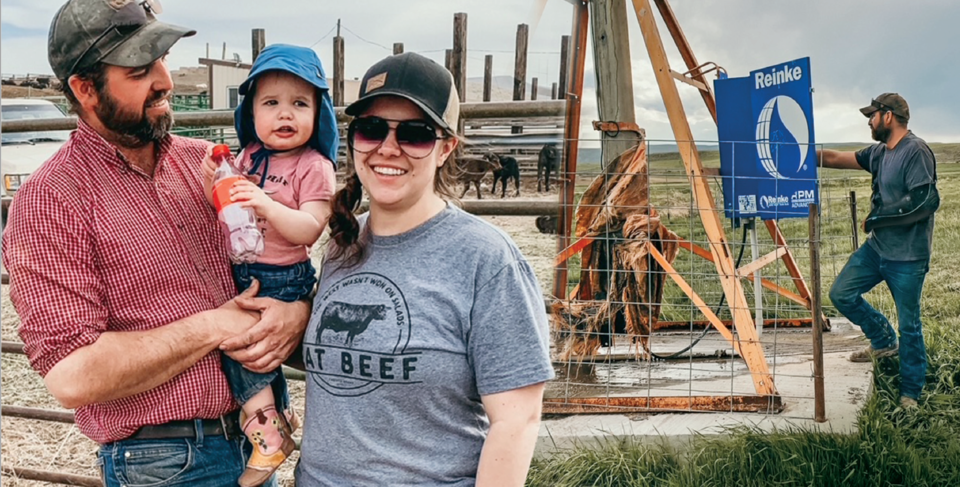 “Our country was founded on ideals of fairness, justice, and liberty. This discriminatory program is everything but.”  – James Dunlap PLF client

Since then, the world has changed, but for James, the allure of ranching has remained constant.

James and his wife, Katie, were already juggling farm work, second jobs, federal farm loans, and a new baby when the pandemic struck. The Dunlaps were stunned, however, to learn that they have the right ranching pedigree for federal loans but the wrong skin color for federal loan forgiveness.

The news was discouraging. The Dunlaps have been living and working on the Baker City, Oregon, ranch owned by James’ parents since 2007. Their mission, however, is ranch ownership for their own family, which welcomed their daughter, Evelyn, in December 2019.

“She’s put some hours in the tractor cab with me already,” James chuckles. “Growing up in agriculture gives you a totally different perspective than almost anything else. I hope to give that to our daughter and future children.”

The Dunlaps own neither their home nor land, but what they lack in cash equity, they make up in sweat equity and determination.

They took second jobs to beef up their cattle herd and provide some extra income to use toward loans they took out from the U.S. Department of Agriculture’s Farm Service Agency in 2017 and again in February 2020, just ahead of the pandemic.

“Then everything went to hell,” James notes. “And the fallout from COVID is worse. I can’t hire anybody because it’s impossible to find anybody who wants to work. Commodity prices are crazy. And now we have the worst drought that Eastern Oregon has ever seen.”

In other words, it’s a terrible time to owe more than $200,000. Like millions of Americans, Katie and James became hopeful when they discovered the American Rescue Plan act of 2021 included a $4 billion farm loan forgiveness provision.

“I was really excited because that would be life-changing for us,” says James. “Then I found out that the loan forgiveness was only for socially disadvantaged farmers, or farmers of color. I thought, ‘How would that even work?’”

The short answer is that it wouldn’t work for the Dunlaps because they’re white.

The law provides loan forgiveness up to 120% of USDA loan amounts solely for minority farmers and ranchers. White farmers are excluded, no matter how dire their circumstances, as a purported remedy for the USDA’s past discrimination against minorities.

James was frustrated, especially because FSA operating loans are designed for the disadvantaged—that is, people who were already turned down by other lenders. But it was Katie who prodded the family to fight back.

“You still have a voice in this country,” she recalls telling her husband. “And on the other side of this, I want to be able to tell our daughter, ‘We stood our ground. We set an example.’”

Represented by PLF free of charge, the Dunlaps filed a federal lawsuit challenging the American Rescue Plan’s unlawful farm loan forgiveness provision—not for money, but for equal treatment and a level playing field for all farmers.

“The government cannot try to combat racial discrimination by mandating more of it,” says PLF attorney Wen Fa. “The civil rights movement of the last century put a well-deserved end to government policy that treated people differently based on skin color. But this program makes it clear that the Constitution’s equal protection guarantee still requires relentless vigilance.”

The Dunlaps join a wave of similar PLF lawsuits that started in Florida with farmer Scott Wynn. He sued in May, and just five weeks later, a federal judge not only granted a nationwide preliminary injunction against the program but also made it clear Scott is likely to win his case.

Encouraged by the success in Florida, Katie and James are proud to stand up for their family, their livelihood, and their principles.

“Our country was founded on ideals of fairness, justice, and liberty. This discriminatory program is everything but,” says James. “Our daughter doesn’t have to grow up and sue the government,” adds Katie. “But I want her to embrace our nation’s fundamental values and speak up for her beliefs.”

Government cannot remedy past discrimination by mandating more of it

A bedrock American principle is the right to equality before the law. Government should treat people as individuals and not discriminate based on membership in a racial group. The Constitution’s equal protection guarantee prohibits government from using skin color to determine eligibility for federal programs.

It is immoral and unconstitutional for government to distribute benefits based on a farmer’s race. Your support for PLF ensures that James and Katie Dunlap can fight for equal treatment and a level playing field for all Americans. Thank you!