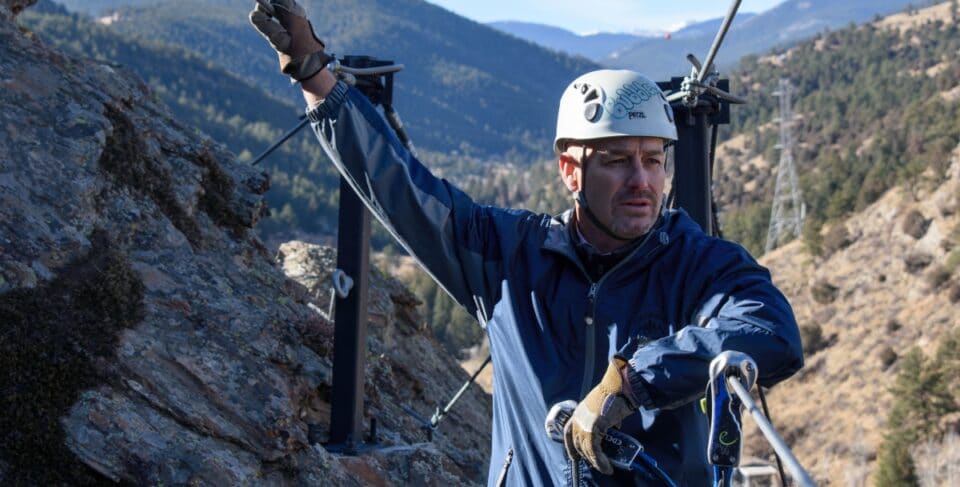 “Taking away what is so dear to us is just a naked abuse of government power.”

As a University of Nebraska Student in the early 1990’s, Duke Bradford worked as an aide for a state senator and planned to attend law school.

Though he enjoyed the legislative process, Duke didn’t have the political—or legal—bug, and he followed his passion for the outdoors instead. Little did he know his life, the government, and the law would again intersect, only this time in a monumental battle for his livelihood and his rights.

It was during a pre-law school hiatus in the Colorado mountains when Duke rerouted his career path to outdoor adventure entrepreneur.

“I fell in love with the recreational activities like rafting, so I decided to try and start a rafting company,” he says. “I typed up a business plan that I carried around in my backpack and sold it to anybody who listened.”

“You do 90% of your business in the month of July, and that has to last the entire year because financial obligations come year-round,” Duke explains. “If you still wanted to follow the passion that brought you there, you had to expand what you did.”

So, AVA added activities such as fly- fishing, ziplining, rock climbing, horseback riding, and camping. The additions ensure a year-round slate of outdoor experiences, the best of which are the guided, multi-day rafting wilderness trips.

“It’s the best thing we do because you get away and cellphones don’t work,” says Duke. “It takes about 24 hours for it to sink in that people don’t have a phone. By the second day, they’re relieved and often become emotional when they reconnect with themselves and their families.”

AVA’s guides are college students and others who have turned the outdoors into a traveling lifestyle of seasonal jobs. Each spring, the guides con-verge in Colorado, eager to navigate the wilderness with the adventure-seeking public for days at a time.

Because their atypical workweeks last only as long as the rafting season and almost always surpass 40 hours, guides command a flat fee per trip, which far exceeds current minimum wage standards. They also collect generous gratuities from grateful customers.

This business model’s success has made it a longstanding industry standard. Nevertheless, the Biden administration aims to destroy it with an impossible—and unlawful—new wage structure.

An executive order signed by President Biden in July 2021 directed the U.S. Department of Labor (DOL) to mandate a $15 minimum wage, plus overtime, for all federal contractors, effective January 30, 2022.

Unfortunately, “contractors” are defined so broadly, the rule ropes in more than a half-million private firms. Among them are 45,000 concession and recreational ser-vices whose only connection to the federal government are licenses or special land use permits.

The leap from a permittee to a contractor is an incredible government overreach for rafting outfitters like AVA who receive no federal funding or benefits but need the permits to use the rivers that flow through the vast federal lands of the Western U.S.

“Government wants to put us in a box with a one-size-fits-all wage structure that just doesn’t work in our environment,” says Duke.

Stripped of per-trip flexibility, Duke’s options are grim: cutting trip lengths and guides’ hours, radically raising fees, and restricting wilderness access to the wealthiest customers, or going out of business.

The rule, itself however, has no business being on the books, as the administration has no constitutional authority over wage laws.

That power lies solely with Congress, which established clear limits and pointedly declined to man-date wages for federal land use. But the President used a 1940s-era procurement statute to sidestep Congress, displace at least five wage-related laws, and grant the DOL policy-making power it shouldn’t have.

“The President’s attempt to seize control of private sector wages through an absurdly loose connection to the federal government is unconstitutional and chilling,” says PLF attorney Caleb Kruckenberg. “By his logic, the President could use procurement authority to force any manner of social agenda on any American.”

Represented by PLF free of charge, Duke and the nonprofit Colorado River Outfitters Association are fighting back to defend their rights to pursue an honest living and to restore the proper separation of powers between Congress and the President.

Duke filed a federal lawsuit in December 2021. He scored an early win in February 2022 when the U.S. Court of Appeals for the Tenth Circuit granted his request for an injunction. The decision halted the minimum wage mandate for the entire outdoor industry, while his case continues.

“People love to work here and share their love of the outdoors with everyone. If this rule stands, so many people who want to enjoy the outdoors are going to lose it,” says Duke. “Taking away what is so dear to us is just a naked abuse of government power.”

The President does not have the power to make laws

The Constitution is clear that only Congress can make law that binds the public. Minimum wages are no exception. Without congressional authority, the Department of Labor cannot redefine federal contractors or mandate changes to their wage structures.

of different industries. Your investment in PLF ensures that Duke Bradford can fight back when the government ignores the constitutional Separation of Powers. Thank you!