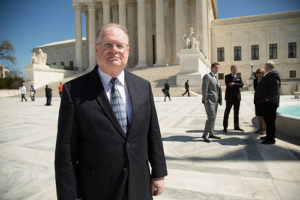 A number of publications continue to focus on Pacific Legal Foundation‘s recent oral argument at the Supreme Court of the United States in U.S. Army Corps of Engineers v. Hawkes Co., Inc.

First, TownHall.com published a column by Congressman Bob Gibbs of Ohio titled, Lifting the Burden of an Expansive Regulatory State. Congressman Gibbs focuses on a number of cases where President Obama’s Administration “finds itself in court defending unilateral actions that are unconstitutional[;]” Gibbs starts with he Hawkes case. After reviewing the facts of the case, he writes:

The real issue at the heart of the matter is the expansion of the regulatory state and the transfer of power from the people and their representatives to a phalanx of unelected bureaucrats. The federal government we have now is too large, it costs too much and, most importantly, it is working for its own benefit rather than for the people. The Obama Administration has increasingly seen fit to bypass Congress, and the American people that we represent, in proposing and finalizing rules and regulations that impact small businesses, hurt American families and undercut the authority of the states themselves.

Certainly Congressman Gibbs picked the correct case to make that point. The people who make up Hawkes Company are blue-collar Americans who are hurt by the Corps’ desire to put a stop to thew work Hawkes Company does, and ultimately the small family held company may go out of business if the feds have their way. And the fact that 29 states filed amicus briefs opposing the Corps’ effort in the case reflects that a majority of the states believe the federal government has wrongly chosen to undercut their authority in its purported enforcement of the Clean Water Act.

Next, the Heartland Insitute summarized a number of recent lawsuits against the Administration in a Heartlander piece it called Lawsuits Piling Up Against Obama EPA. The piece takes a deep dive into Hawkes:

While the Hawkes case has received relatively little attention, Mark Miller—a managing attorney with the Pacific Legal Foundation, a member of the legal team that will be arguing the case before the Supreme Court—says Hawkes is an important case for property rights.

The plaintiffs in the case are three family operated companies in Minnesota that process peat, a material that can be found in bogs and is often used for landscaping.

Miller says while the Hawkes’ property does contain wetlands, “not all wetlands are subject to federal control.”

The Court in Hawkes will decide at what stage a lower federal court can hear and decide if the Clean Water Act applies particular wetlands, not whether the Hawkes’ land contains wetlands.

“[The case] is about a landowner’s access to a neutral judge when federal agencies try to regulate [property] under the Clean Water Act,” said Miller.

That question is important because the procedural hurdles faced by landowners seeking a Clean Water Act permit are immense. In its brief to the Court, the Hawkes legal team cited a previous Supreme Court decision that noted the average applicant for such a permit “spends 788 days and $271,596 in completing the process.”

Miller says if the Court rules against the plaintiffs, “landowners will have to continue to waste years and spend hundreds of thousands of dollars to exercise their constitutional right to use their property,” said Miller. “Many land owners will simply throw in the towel and give up their rights, rather than try to fight a government that has unlimited time and money.”

The case is especially noteworthy in light of the government’s controversial Waters of the United States (WOTUS) rule, which expanded what the federal government considers “navigable waters” under the jurisdiction of the Clean Water Act. States and industry groups across the nation have filed suits challenging EPA’s WOTUS rule, which has been put on hold by the 6th Circuit Court of Appeals in Cincinnati while it considers the rule’s legality.

The Heartland Institute accurately connects the outcome of Hawkes to the ongoing WOTUS litigation; if the feds have their way, then fights over the presence of waters of the United States will become more expensive, more lengthy, and arise much more often than they do now. Thus, property owners will need the ability to seek the judicial review that the Hawkes decision should secure for them.

Lastly, Kenneth J. Warren of The Legal Intelligencer provided a very concise and accurate summary of how the oral argument went at this link. His prediction gives hope for landowners facing down the government:

At the end of the day, the Hawkes court may give weight to the potential coercive effect of the JD in requiring Hawkes to abandon the project or make painful concessions and expenditures to secure a permit that may be not be legally required. In many instances, absent judicial review of an unfavorable JD, a project sponsor may conclude that the only practical alternatives are to accept the Corps’ permit conditions or abandon the project. In either case, there would be no judicial review. The court is likely to find a way to ­moderate that ­result.

PLF looks forward to the decision, which it expects to receive no later than the end of June.