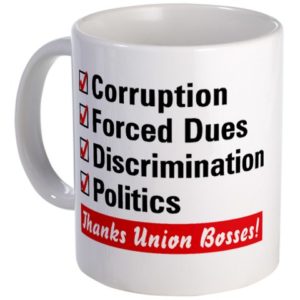 The very powerful public employee unions in Illinois have long relied on their favored status to garnish wages of workers and “represent” them in politically-fraught negotiations over collective bargaining agreements with the state. The unions’ power is so great that state laws allow them to steal wages and purport to speak for workers who are not union members. How is this possible? The primary culprit is a 1977 Supreme Court decision called Abood v. Detroit Board of Education, which rejected a First Amendment challenge to this forced association with the unions and permits public-employee unions to garnish wages of unconsenting non-member employees for the purpose of collective bargaining and contract administration.

Abood has been significantly weakened in recent years, however, as the Supreme Court has recognized that the premises underlying the decision were unsound. In 2012, Knox v. Service Employees International Union held that unions must obtain affirmative consent before taking wages to subsidize midyear assessments and the Court suggested in dicta that such affirmative consent may be required for annual agency shop fees as well. Further, the Court noted that the Constitution might forbid a state from forcing non-union public employees to pay any union dues. Two years later, in Harris v. Quinn, the Court struck down compulsory union fees for homecare providers who indirectly receive state subsidies based on their clientele. In Harris, a majority of the Court characterized public-sector union officials’ forced dues powers as “questionable on several grounds.” The Court seemed poised to overrule Abood and invalidate compulsory funding entirely in Friedrichs v. California Teachers Assn. in 2016, but the case ended in a 4-4 tie after Justice Scalia’s death.

The National Right to Work Legal Defense Foundation recently filed two cert petitions aimed at the heart of Abood and public-employee union “exclusive representation” laws. Janus v. AFSCME directly challenges Abood, asking the Court to revisit and overrule that case to hold that the First Amendment requires affirmative consent before one penny of a worker’s wages is deposited into union coffers. Hill v. SEIU  challenges the “exclusive representation” aspect of Illinois’ home healthcare and childcare provider laws, which grants to public-employee unions the exclusive ability to bargain with (that is, lobby) the state over regulations and policies related to the state care-services program. The state is explicitly forbidden from considering any input from taxpayers or care providers who are not union members.

PLF, joined by Linda Chavez and our allies at the Goldwater Institute, The Fairness Center (as well as several of their clients in a similar Pennsylvania lawsuit), the Pioneer Institute, and the Empire Center for Public Policy, filed amicus briefs in support of both Janus and Hill. Among other things, we argue that these types of laws give a green light to unions and politicians to collude to benefit the unions at the expense of individual workers and citizens, who have basic, fundamental rights to speak and petition the government. This is an issue of growing national importance as states increasingly require in-home workers who are eligible to receive government subsidies to be subject to exclusive representation laws solely for the purpose of enhancing union power. Abood has stood as a blot on individual rights for 40 years. These cases clearly put before the Supreme Court the question of whether it is time to rid our constitutional jurisprudence of this aberration that permits states to violate individuals’ First Amendment rights for the benefit of public employee unions’ collective politicking.