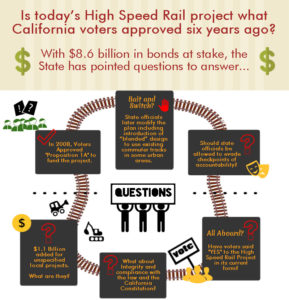 There was tough questioning from the bench today at the state appellate court hearing in Sacramento on key challenges to the controversial way the California High Speed Rail project is being pursued.

Nevertheless, the arguments in support of the challenges – and against the government’s attempt to operate the project without rigorous oversight – have been presented to the court with clarity and force, both today and through the written pleadings.

This is certainly true for the issues that Pacific Legal Foundation is prosecuting in the “bond validation case” – i.e., the challenge to the state’s attempt to win judicial approval for $8.6 billion in High Speed Rail bonds.

The California Constitution says borrowing of this size needs voter approval – and so does the specific purpose of the borrowing.   Yet the state wants to skirt this mandate.  It argues that the High Speed Rail bonds should be “validated” – and allowed to be sold – without any showing that the current rail project and spending plan are the same as voters approved back in 2008.

In other words, the state is trying to speed this project past a key checkpoint of accountability to the people.

Now we await a ruling on whether the High Speed Rail project will be held to high standards, in terms of compliance with important constitutional requirements – and with taxpayers’ and voters’ rights.

For more on this case, visit the PLF Website