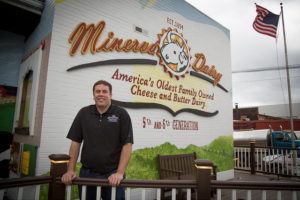 This morning, Minerva Dairy and its President, Adam Mueller, challenged a Wisconsin law that bans butter from being sold within Wisconsin if it hasn’t first been “graded.” Wisconsin’s law prevents butter makers outside of Wisconsin from selling their products in that state unless they first go through the arduous and cost prohibitive process of getting their butter graded. The lawsuit alleges that Wisconsin’s law violates the Commerce Clause, as well as the Due Process and Equal Protection Clauses of the Fourteenth Amendment.

Most butters sold in the United States are not graded, and graded butter is no more safe than ungraded butter. That’s why neither the USDA nor 49 states (not named Wisconsin) require butter to be graded for it to be sold.  In fact, all “graded butter” ensures is that the butter is going to taste exactly how the government wants it to taste. But Minerva Dairy sells an artisanal, amish-churned butter. It does not want its butter identified with that government-mandated taste.

In addition to Minerva Dairy’s serious concerns about being being lumped in with commodity butters, it is cost-prohibitive for Minerva Dairy to have its butter graded. Because it is based outside of Wisconsin, the only way to have its butter graded is to pay for the costs (time and travel) for a USDA-licensed taste tester based in Chicago to come to its facilities and grade the butter. Of course, because Minerva Dairy produces small batches of slow-churned butter 14-18 times a day, the USDA official would have to test each one of those batches independently. Minerva would then need to create Wisconsin-specific labels for its product. In addition, because Minerva Dairy sells its product both online and through regional distributors that cover multiple states, it cannot easily predetermine which batches of butter might ultimately be sold in Wisconsin.

It is no surprise then, that only the big conglomerate, commodity butters go through the arduous process of getting their butter graded.  For those giant butter makers, selling graded butter makes economic sense. It proves all their butter is the same and that it conforms to the government mandated taste. But Minerva Dairy doesn’t have those same concerns, and it shouldn’t be denied the opportunity to compete simply because it wants its product to taste unique.

Pacific Legal Foundation is proud to represent Minerva Dairy and Adam Mueller in this fight against Wisconsin’s antiquated law. The Commerce Clause of the United States protects a national, interstate market, and Wisconsin cannot erect barriers that insulate in-state businesses from competition. This anti-competitive law also denies Adam Mueller his right to earn a living and denies him equal protection of the laws.  This law is irrational, arbitrary and treats in-state butter makers differently for no legitimate governmental reason.