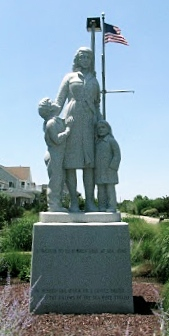 “Dedicated to Fishermen Lost at Sea”

William Kent Suter, Former Clerk of the Supreme Court of the United States, recently observed that the federal government had “lost four cases dealing with fundamental rights in unanimous decisions[,]” and that “the positions taken by the government suggest[ed] bullying and strong-arm tactics.”  Not surprisingly, the Court rejected those tactics and instead came down on the side of individual rights.  Standing on the side of liberty, Pacific Legal Foundation represented the winners in one of those four cases—Mike and Chantelle Sackett—and supported the winners via an amicus brief in another one of the cases, known as Arkansas Game & Fish Comm’n v. United States.  I wonder what Mr. Suter would think of the facts of a case recently accepted for review by the Court called John L. Yates v. United States? And more importantly, I wonder what the Supreme Court will think?

Mr. Yates, a grandfather and commercial fisherman who has made his career fishing the Gulf of Mexico off the coast of Florida, found himself in the cross hairs of the federal government because of fish that were an inch shorter—one inch shorter!—than the government allows fishermen to catch.  Rather than try to tell his story for him, I’ll let him tell it:

What do the former employees of Enron and I have in common? According to the Department of Justice, we’re both guilty of the same crime. They spent their nights purging documents in order to hide massive financial fraud. I was accused of disposing of several purportedly undersized red grouper into the Florida surf from which I caught them. []

In 2007, I was fishing commercially off the coast of Cortez, Fla., in the Gulf of Mexico. A Florida Fish and Wildlife Commission officer, cross-deputized by the National Oceanic and Atmospheric Administration (NOAA), boarded my boat to inspect it for safety equipment. Upon boarding the vessel, the officer believed that the fish in my catch were below the 20-inch harvesting minimum for red grouper, as was then required by federal regulations for conservation purposes.

He spent the next four hours inspecting my more than 3,000-fish catch before ordering me to bring 72 allegedly undersized fish back to shore for further inspection. I was issued a civil citation from the state of Florida. The next day, after my commercial fishing boat returned to port, the Florida officer, along with several federal agents with weapons, examined my vessel’s whole catch, finding only 69, not 72, undersized fish.

Nearly three years later, the federal government charged me with the destruction of evidence—yes, fish—to impede a federal investigation.[]  [Additionally,] the Department of Justice wanted a pound of flesh: They charged me in 2010 with violating the Sarbanes-Oxley Act’s “anti-shredding” restrictions. Passed in the wake of the Enron scandal, this provision aims to prevent white-collar criminals from destroying documents and records with the intent of defrauding investors and the general public. The crime carries a maximum penalty of 20 years in federal prison.

I was convicted of violating Sarbanes-Oxley by a federal jury trial in 2012. The judge sentenced me to 30 days in prison for my crime, followed by three years of supervised release, DNA collection, financial restrictions, travel restrictions and more.

PLF opposes the violation of criminal laws, but also opposes the federal government misusing its law enforcement authority and threatening Americans with exorbitant penalties for conduct that does not post a significant threat to health, safety, or the environment. Here, Mr. Yates—the kind of person that Ayn Rand may have recognized as a “producer”—had already been found to violate civil fish & wildlife laws by the government when he made the wrong decision and threw back some of the undersized fish he had caught. If he deserved a penalty for that, then the government should have imposed the regulatory penalty that applied.

The federal government’s decision to charge him with violating a law designed for corporate crime, a law that carried a possible 20-year prison sentence, was not a proper use of the awesome discretion that the federal government has when it considers whether to criminally charge an American just trying to make an honest living. Rather, it was an abuse of power most likely designed to exact a plea of guilt from Mr. Yates in exchange for a reduced sentence. Some experts like Professor Glenn Reynolds at the University of Tennessee College of Law have written law review articles that label this abuse of power “overcharging.”

We call it an injustice.

The statue photographed above memorializes the many fishermen who spent their lives fishing the waters of the east coast and lost their lives in this most dangerous pursuit.  Nevertheless, these fishermen loved the sea and were willing to put their lives at risk to take care of their families. It is families—like the wife and children looking out to sea for their husband and father in the memorial pictured above—that have the most to lose when the federal government abuses its “almost unconstrained power” to overcharge a man (or woman) with crimes that do not apply to the conduct at issue in order to exact a plea bargain from the defendant because of the fear of spending decades in prison for crimes the defendant did not commit.  Hopefully, the Supreme Court accepted this case in order to tell the government to stop relying upon “bullying and strong-arm tactics” in the federal courts, as Mr. Suter, the former Supreme Court Clerk, has seen the Court do in those other cases he recently described.