As every school-child knows, the U.S. Government is divided into three branches: Legislative, Executive, and Judicial. Article I of the Constitution vests “[a]ll legislative Powers [t]herein granted” in Congress. And while Congress has delegated rule-making or quasi-lawmaking authority to executive agencies,* Congress ultimately retains all legislative power. Therefore, any power delegated to the executive by Congress can later be restricted or withdrawn. 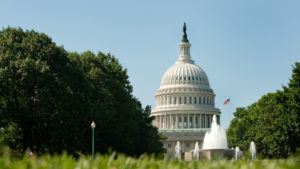 Not so, according to a new lawsuit filed by the Center for Biological Diversity, which makes the extraordinary claim that a duly enacted law invalidating an executive-agency rule amounts to Congressional invasion of executive-branch authority. In other words, CBD claims that it is unconstitutional for Congress to pass laws. Under CBD’s tortuous theory, once Congress delegates rule-making authority to an executive agency, Congress relinquishes all oversight unless and until it expressly amends the statute that originally granted such authority. Otherwise, CBD contends, Congress unduly interferes with the role of the executive branch. This argument turns the Separation of Powers doctrine on its head.

To defend Congress’s proper role as the first branch of government and the vested repository of all legislative power, Pacific Legal Foundation today moved to intervene in CBD’s lawsuit on behalf of itself and its clients Kurt Whitehead, Joe Letarte, the Alaska Outdoor Council, and Big Game Forever. PLF has filed a motion to dismiss to throw out CBD’s baseless lawsuit.

At issue is CBD’s challenge to Public Law No. 115–20, which invalidated a rule adopted by the Interior Department near the end of President Obama’s term. See “Non-Subsistence Take of Wildlife, and Public Participation and Closure Procedures, on National Wildlife Refuges in Alaska,” 81 Fed. Reg. 52,248 (2016). This so-called “Refuges Rule” severely restricts access to and use of land within Alaskan National Wildlife Refuges.

Messrs. Whitehead and Letarte are both Alaska Master Guides, who have used and guided hunts within the Alaskan National Wildlife Refuges and plan to continue their use. Alaska Outdoor Council and Big Game Forever represent tens of thousands of individual hunters, fishers, hikers, outdoorsmen, even photographers, who will also be prevented from using these lands. All of our clients engage in conservation efforts—indeed, Messrs. Whitehead and Letarte’s livelihoods depend on a healthy, diverse wildlife population. And they all seek to help manage the predator population, which threatens to eliminate moose and other ungulate species in Alaska.

Additionally, PLF itself is a party seeking to intervene. Through its successful Red Tape Rollback project, PLF has been the leader in promoting the Congressional Review Act. Under the CRA—which was signed by President Clinton with wide bipartisan support—Congress and the President may enact laws to “disapprove”, i.e., invalidate, executive-agency rules. Public Law 115–20 was passed under the CRA.

CBD claims that Public Law 115–20 was passed outside of the parameters of the CRA. CBD’s reading of the CRA is flawed, and PLF’s proposed intervention guarantees that the Court will be presented with the proper understanding of the CRA. The head of PLF’s Red Tape Rollback project is Todd Gaziano, director of PLF’s DC Center and its Senior Fellow in Constitutional Law. Before joining PLF, Mr. Gaziano was the key drafter and negotiator of the bill that became the Congressional Review Act, while working closely with Rep. David McIntosh, the CRA’s chief sponsor in the House. Rep. McIntosh, members of the national media, and others have described Mr. Gaziano as the foremost authority on the CRA.

We look forward to marshaling our expertise in this lawsuit to defend the Separation of Powers doctrine and keep legislative power in the legislative branch—and to protect our clients’ rights to use the great outdoors.