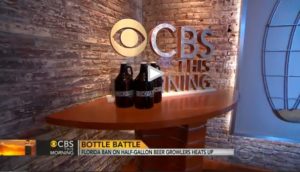 Earlier today, Pacific Legal Foundation filed its response in opposition to the State of Florida’s motion to dismiss PLF’s lawsuit challenging the State’s irrational law banning beer growlers. The growler, of course, is the industry-standard half-gallon containers of beer that craft beer enthusiasts prefer throughout the United States, and, per CBS News, is only completely illegal in Florida.

Together with our client The Crafted Keg, we allege that it makes simply no sense for Florida to allow gallon-size jugs of beer, and to allow quart-size jugs of beer, but at the same time to prohibit the industry-standard size that falls right in the middle of those two sizes.

The State does not want PLF and The Crafted Keg to have their day in court, and that is why the State has moved to dismiss the case.  We think our client’s claims deserve to be heard.

Take a moment and drink that argument in; query whether it’s 2014 in Florida, or the eve of Prohibition, circa 1920.

We argue that the court should deny the motion because the growler ban does not rationally further that purpose, or any other legitimate government purpose. You can read our entire argument here.