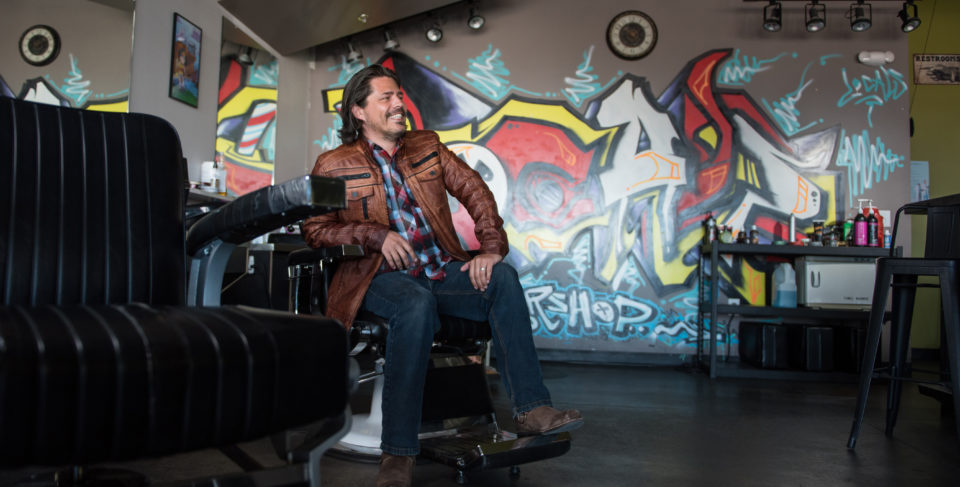 “If I were Black, and the racial requirements were flipped, that would be just as wrong.” — Etienne Hardre PLF Client

When it comes to people, the only color that matters to Etienne Hardre is hair color.

The right color, cut, shampoo, and shave all shape the way the customers of his Colorado Springs business, Locals Barbershop and Salon, feel about themselves.

“‘Our tagline is, ‘We don’t sell haircuts, we sell confidence,’” he explains.

As he searches for ways to keep his business running throughout the pandemic recovery, Etienne’s own confidence is being put to the test by a state law that’s forced him to the back of the line for COVID relief funds—because of his skin color.

Etienne is a CPA by trade and has spent his career helping other businesses launch and flourish. He plunged into business ownership when he bought the hair salon from a friend in 2014 and has never looked back.

“I was there every hour of every day, and we quickly doubled our revenue. Two-and-a-half years later, we were bursting at the seams, so we acquired the adjacent store space and doubled the size of our shop from 1,500 square feet to 3,000,” recalls Etienne. “Honestly, it’s a privilege to have built something.”

And it’s become a family affair: Etienne’s wife and four sons—ages seven to 13—are all involved in the business.

Etienne had even started plans to franchise his business when COVID struck. State-wide business shutdowns quickly shifted his priorities from expansion to mere survival.

“That was the hardest challenge in my entire career,” he says. “I was on the phone all the time, constantly hassling our local, state, and federal lawmakers about relief funding. I applied for every grant and was able to get a Paycheck Protection Program loan, which absolutely saved our business from oblivion.”

When businesses were finally allowed to reopen, however, reduced capacity and other restrictions still left Etienne struggling to stay afloat.

“We were allowed to open with only ten people in a 3,000-square-foot building, including our staff, and we could only serve four people at a time,” Etienne says. The capacity cap was so illogical and inconsistent, he gave the governor’s office an earful: “Costco is right across the parking lot from me and can have as many people as they want inside.”

Last fall, with his business hanging by a thread, Etienne was hopeful about a pandemic-related bill going through the state legislature that included $4 million in relief payments, grants, and loans to beleaguered small businesses.

Not just any businesses, though.

Signed on December 7, 2020, by Governor Jared Polis, the bill assigned $4 million to the Colorado Minority Business Office, with orders to distribute the funds to minority-owned businesses. In other words, the law used race to disqualify white business owners, like Etienne, from any chance of receiving much-needed relief funding.

“I was shocked,” he says. “I know the Constitution and the Fourteenth Amendment.

Government funds should never be allocated based on a person’s skin color or ethnicity. If I were Black, and the racial requirements were flipped, that would be just as wrong.”

Etienne filed suit the day after the law went on the books. Legislators quickly amended the law, but it still includes preferential treatment for minority-owned businesses.

Represented by PLF free of charge, Etienne is now forging ahead with his case to knock government’s thumb off the scales and restore the right of all business owners to equal protection before the law.

Etienne is pursuing justice for his family and the employees who depend on his business, while simultaneously standing up for our nation’s fundamental principle of equality.

“You’ve got to take a stand at some point,” he says. “There’s no difference between us. The blood that comes out of us is the same color, and all of our businesses have suffered. Many better men than me have made that argument. I just happen to agree with them, and I want to see that upheld. Let’s make sure public funds—which came from all of us—are available for everyone.”

Treating people according to immutable characteristics like skin color violates the very notion of equality before the law. Basing government grants on race to achieve a preferred eco-nomic outcome is discriminatory and violates the Constitution’s equal protection guarantee.

People should be treated as individuals, not as members of a group they did not choose. This doesn’t change when people own businesses. Your commitment to PLF ensures that Etienne Hardre can stand up to a government mandate that puts his skin color ahead of his rights. Thank you!