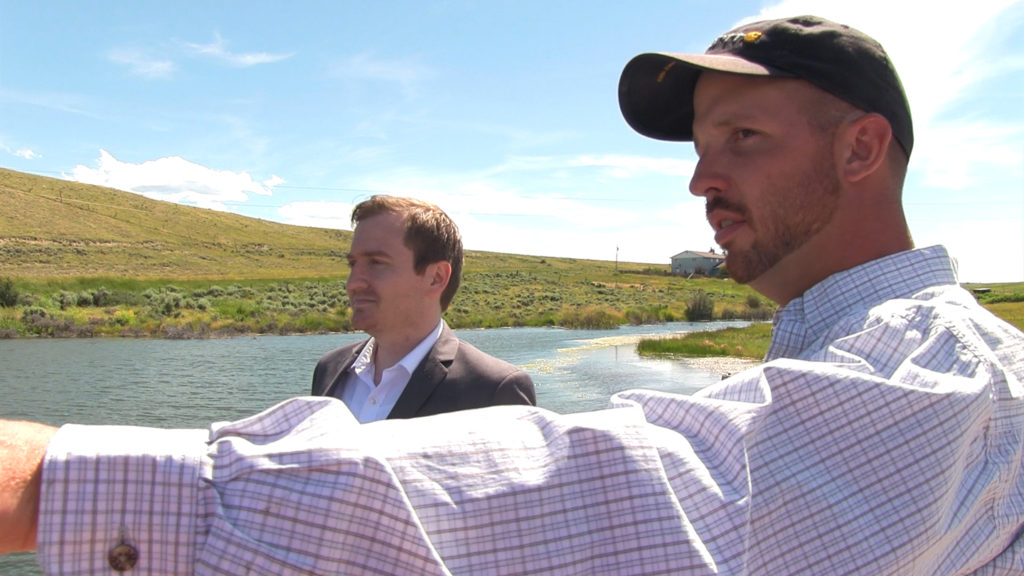 Cheyenne, Wyoming;  August 27, 2015: U.S. Clean Water Act regulators are violating federal law by telling Andy Johnson, owner of a small farm in Fort Bridger, Wyoming, that he did not have the right to create a stock pond on his land, and by threatening him with millions of dollars in fines if he does not bow to their demands and destroy the environmentally beneficial pond.

Filed in U.S. District Court for the District of Wyoming, PLF’s lawsuit points out that Congress expressly exempted stock ponds from Clean Water Act (CWA) jurisdiction.  In violation of this provision, EPA bureaucrats have issued a “compliance order” demanding that Andy Johnson’s property be returned, under federal oversight, to its condition before the stock pond was created.  This decree carries astronomical financial penalties:  The fine for not acceding to a CWA compliance order is $37,500 per day; during the 14 months that he has tried to explain to EPA its error, his potential liability has already grown to over $16 million.

“We are challenging an outrageous example of EPA overreach against a private citizen who has done nothing wrong,” said PLF Staff Attorney Jonathan Wood.  “Andy Johnson constructed a pond for his livestock by damming a stream on his private property with no connection to any navigable water.  Under the plain terms of the Clean Water Act, he was entirely within his rights, and didn’t need federal bureaucrats’ permission.

“But EPA regulators have decided they know better than the law,” Wood continued.  “By trying to seize control of Andy Johnson’s land — and threatening him with financial ruin — they are imposing their will where they have no authority.  Ironically, EPA is attempting to destroy a scenic environmental asset that provides habitat for fish and wildlife, and cleans water that passes through it, all in the name of enforcing the Clean Water Act.”

Andy Johnson created his stock pond in 2012 by building a dam across an intermittent stream on his property, to provide a more reliable water source for the horses, cows, and other livestock on his farm.  He consulted with state and local agencies and received all necessary permits.

The construction was very environmentally sensitive.  All materials came from the stream.  And a spillway was created so the downstream flow would not be disrupted except while the pond was filling.

“In addition to providing water for his livestock, the pond has been an environmental boon,” said Ray Kagel, a former Army Corps of Engineers enforcement officer and environmental consultant.  “It created wetlands where there had previously been none.  It provides habitat for fish and wildlife, including migratory waterfowl, passerine birds, a bald eagle, and moose.  And it improves water quality by providing a place for sediment and other suspended solids to settle.

In January 2014, Andy was blindsided when he received a compliance order from EPA accusing him of violating the CWA by constructing the dam without federal permission.  The compliance order directs him to restore the property and prepare a mitigation plan for federal approval.  And it threatens him with $37,500 in fines for every day that he does not comply with the order.

“The EPA is clearly acting beyond its authority, because the Clean Water Act exempts stock ponds from any requirement for a federal permit,” said Wood.  “The regulators have never deigned to say why they think they’re not bound by this provision.“Moreover, the intermittent stream that Andy dammed is not subject to Clean Water Act jurisdiction,” Wood added.  “The stream flows into an irrigation system that consumes all of the water.  There is no effect on any traditional navigable water, such as a river or lake.  The Supreme Court has said that there must be a connection to a traditional navigable water to justify regulation under the Clean Water Act.”

Andy Johnson tried in vain to negotiate with EPA

“For more than a year, Andy Johnson has sought to explain EPA’s error to it,” said Wood.  “He provided them a report on the project prepared by a former Army Corps of Engineers enforcement officer that lauds its many environmental benefits.  Of course, he pointed to his receiving all the necessary state and local permits.  But EPA won’t budge, or even explain why it should be able to ignore the law’s exemption for stock ponds.”

Indeed, the EPA continues its crusade against Johnson even though Wyoming state officials have said that he complied with all state requirements.  The state engineer, for instance, says that Andy’s state permit is “in good standing and entitled to be exercised exactly as permitted.”

Gov. Matt Mead, in a statement, said:  “Mr. Johnson permitted and constructed his stock water pond appropriately. … The actions of the EPA in regard to Mr. Johnson have been heavy-handed.”

Statement by Andy Johnson:  “The EPA is out to expand its power, and I’m a test case.  We’re going to fight them all the way.”

“We wanted to provide stock water for our horses and cows, improve our property, and provide an environmental benefit as well,” said Andy Johnson.  “We went through all the hoops that the state of Wyoming required, and I’m proud of what we built.  My pond has been a tremendous environmental benefit.  You can see moose and other wildlife come down, and four- and five-pound brown trout live in it.  And water that goes out through the spillway is filtered and pristine.

“But the EPA has ignored all of that,” Johnson continued.  “They originally gave me 30 days to dismantle the pond — which would have been physically impossible.  And they said from the first there could be fines of tens of thousands of dollars per day.  Threatening me with ruinous fines even though I’ve done nothing wrong is extortionate.  I don’t know any other way to say it.  We are not going to cave.  We’re going to fight them all the way.

“This is a battle about more than my land, my livestock, and my pond,” he said.  “The EPA is on a mission to expand its power.  They want to take over jurisdiction over private property throughout the United States.  I think they’re using me as a test case.  I’m grateful that Pacific Legal Foundation is standing with me to fight for my rights — and everyone’s freedom against a bureaucracy that’s running wild.”