“Imagine if we broke out of these tired old patterns.  Imagine if we did something different.”  That wasn’t John Lennon speaking from the grave, it was the President delivering his State of the Union.  And he even continued, “I commit to every Republican here tonight that I will not only seek out your ideas, I will seek to work with you to make this country stronger.”  Well, at least we know he wasn’t talking about people living in Alaska.  Or people in the lower 48 who drive cars.  It’s not exactly conciliatory to come out swinging with a unilateral proposal to lock up over 12 million energy-rich acres of Alaska.  Alaska is a state where cooperation works:  Democrats and Republicans, union bosses and boss bosses, and blue collar and white collar workers share a belief that the arctic can and should be developed — carefully yes, responsibly yes, but still developed.

Of course, anyone who took solace in the President’s conciliatory language should  first have paid attention  to these two contradictory sentences:  “And that’s why, over the past six years, we’ve done more than ever to combat climate change, from the way we produce energy to the way we use it.  That’s why we’ve set aside more public lands and waters than any administration in history.”  Say what?  How does locking up public lands do anything to combat climate change, or produce energy?

Alaska has 222 million acres of federal lands, almost 60% of the state – a state where less than 1% is privately owned.  222 million acres is larger than 15 Eastern states combined. Since Prudhoe Bay went into production, it has produced 16 billion barrels of oil – nearly a fifth of the nation’s supply.  But that field is now declining.  If it isn’t replaced, the pipeline 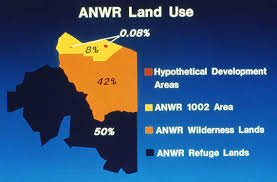 may cease delivering oil.  The coastal plain of Arctic National Wildlife Refuge is estimated to have 10 billion barrels more.  Drilling for that oil with modern technology would cover about 2000 acres – about the size of Dulles Airport in a refuge of 19 million acres – 42% of which is already permanently sealed off as Wilderness.  The Chukchi and Beaufort Seas are estimated to contain another 27 billion barrels of oil – barrels that might never be drilled if the Department of Interior imposes new restrictions as expected later this week.

Of course, we’re in a respite now because of the resurgence of oil production in the lower 48 through hydraulic fracturing.  But nothing, and certainly not cheap oil, will last forever.  New York just banned fracking.  Who knows what California will do tomorrow?  Prices will rise again as sure as night follows day.  And then we’ll be wishing for more oil from Alaska. And even if the President and Congress agreed tomorrow to allow drilling — just to see what is there — it would take many years before the first drop of oil reached consumers.

By the way, if you see photos of the

Refuge with mountains and hillsides covered with flowers — that’s not the part where drilling is proposed.  The only proposals for drilling are on the 1.5 million acre coastal plain, which is flat and, depending on the time of year, wet or frozen.  Sure, it supports a lot of wildlife in the summertime, but there is no good argument that any wildlife will be harmed.

Some of us remember all the doomsday scenarios painted by the greens when Prudhoe Bay was opened up: Caribou and other wildlife would be wiped out; the pipeline would constantly break and spill oil, the arctic would be destroyed.  None of that has happened.  The wildlife is more abundant than ever (probably due to hunting restrictions near the pipeline and facilities).  Onshore spills have been small and contained.  And, we’ve learned from the tragedy of Prince William Sound to the south.