This road to the Supreme Court goes through the U-P 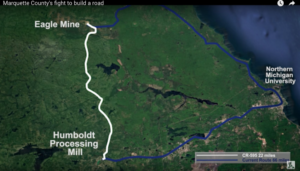 The planned road – in white – would cut about 40 miles off the long road trip (in blue) trucks must take each day to move minerals from the Eagle Mine to the Humboldt Mill. The planned road would increase safety for the people in the upper peninsula, since the current path for the trucks takes the trucks through small towns and along the campus of Northern Michigan University. It would also be better for the environment, since it would shave close to 40 miles off the trip, thus allowing for less fuel and oil to be expended.

In this case, we take on the EPA’s 2012 decision to veto a road project in Michigan that would have improved the economy and environment in the Upper Peninsula of Michigan. The people of the Upper Peninsula want the road. The local government authority for the project, known as the Marquette County Road Commission (our client in the case), wants the road. The state government wants the road.The Michigan Department of Environmental Quality approved the road.

But that local and state agreement is of no matter to the bureaucrats in D.C. They highhandedly overruled what the people and elected officials of Michigan want for the state and its infrastructure. The EPA, citing vague and arbitrary environmental concerns that would not hold up in court if tested, refused to allow the project to go forward. And to make matters worse, the EPA submits that its reasons for objecting to the permit are beyond question. Instead of acknowledging that PLF’s precedent-setting wins in Sackett v. EPA and Army Corps of Engineers v. Hawkes Company allow for PLF and its client the Road Commission to bring a court challenge to the EPA’s decision, the EPA contends those cases really don’t open the court house doors for litigants like the Road Commission. Instead, the EPA contends the Road Commission should have to start over in its effort to win approval for the road in front of the US Army Corps of Engineers. The fact that this would cost the taxpayers upwards of $271,000 and years of time, all to win approval for a road already approved pursuant to the Clean Water Act as written by Congress, is of no moment to the EPA.

We respectfully disagree. That’s why we’re back in front of the Supreme Court and asking the justices to remind the EPA of its obligations to defend its final decisions in court pursuant to the Administrative Procedure Act. If the EPA is right about its reasons to veto the road, then it should have nothing to fear about court review of those reasons.

Maybe that’s why the bureaucrats don’t want the case heard.

Earlier this week, The Hill published my op-ed diving into the facts and law of the case. Please give it a read. And why stop there? Check out our case page and our Wall Street Journal opinion piece on the case as well.

Lastly, if you’re a Trump Administration EPA official wondering why in the world the current administration is carrying this particular baton for the prior Obama Administration?, join the club. Why not do something about it and convince the regulators to reverse this decision that is bad for the environment, bad for the infrastructure of Michigan, and hurts industry and development in Michigan? While we always like winning in court, what’s most important is that this road get built for our client.

We’re waiting on your call.