Economic liberty: the best way to help the poor 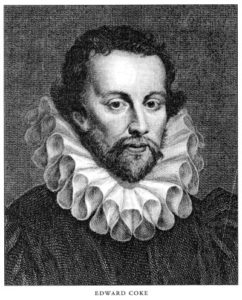 Lord Coke probably didn’t have great dental care, but he understood the right to earn a living.

An unfolding tragedy in Washington state demonstrates how freedom serves the poor better than government ever will. Washington faces a dental crisis for the poor. Dentists routinely decline to serve patients who are on Medicaid because Medicaid fronts only a fraction of the cost. That means about a quarter of the state population doesn’t get needed dental care. And the number one reason people show up in emergency rooms in Washington? Dental problems.

According to a recent article in the Seattle Times, the major culprit in this tragedy is the Washington state government. The state has placed severe limits on who can practice dentistry, thus preventing affordable services from entering the market. Dental therapists, who are like nurse practitioners, can perform many basic procedures like cleanings and filling cavities. And their services are much cheaper.

Enter the dentists’ lobby. Dentists throughout the country have opposed dental therapists, branding them as unsafe. Numerous studies have demonstrated otherwise. Yet in Washington, dental therapists are forbidden from practicing.

Dentists’ opposition is no mystery. Professions across the United States regularly push for laws that will shackle possible competitors. And they often succeed. In fact, about a third of jobs in the United States require that you get a license, often at the expense of precious time and money.

This rent-seeking hurts the poor in two ways. First, it makes it harder to get a job, especially if you can’t afford licensing requirements, such as a college or vocational education. Second, these restrictions on competition keep prices high.

The ban on dental therapists, however, is even worse. Dental therapists can’t operate at all in the state, with or without a license. And unlike licensing requirements for florists, or interior designers, the service at stake is a vital one. The poor don’t need the government to forbid them from receiving certain types of dental treatment. The  poor need access to care.

We don’t need any new ideas to fix this problem. We need old ones. We should listen to 17th century English Judge Edward Coke. In his day, trade guilds loved to shut out competitors on the grounds that they were unsafe or would do a bad job, just like the dentists’ lobby of our day. Coke said, the “possibility that a practicioner might do a bad job was not a good excuse for restricting economic freedom, raising costs to consumers, and depriving entrepreneurs of economic opportunity.” The founders understood this well, which is why they too believed in a natural right to earn a living that government could not intrude upon.

Dentistry has advanced since the 17th and 18th centuries, but respect for economic liberty has not. Courts often defer to lawmakers when it comes to laws that burden our right to earn a living. They mistakenly believe that judges must bow to democracy except in the most heinous circumstances. But courts exist to champion the rights of the vulnerable when the powerful threaten them. That means the right to earn a living trumps the legislature. We don’t need new-fangled campaign finance rules to keep powerful lobbyists from swaying legislators. We just need to enforce the rights that we’ve always had. That’ll certainly do more for dental care for the poor than Medicaid.