Blog > Uncategorized > After 22 years, government compensates PLF client for taking use of property 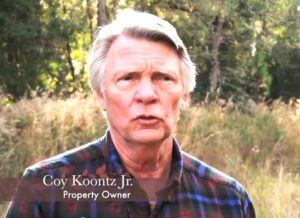 This week, after 22 years of litigation, the St. Johns River Water Management District finally paid the Koontz family for taking the use of Coy Koontz’s property.

This case began in 1994, when the St. Johns River Water Management District told Koontz that if he wanted a permit to build on 3.7 acres of his vacant property, he would have to dedicate the remaining 10.5 acres to conservation and spend up to $150,000 repairing government property miles away from his land.  Mr. Koontz refused to agree to repair government property that had no relationship to his proposed development.  As a result, the District denied Mr. Koontz a permit.

Mr. Koontz sued, died mid-litigation, and his son Coy Koontz, Jr, carried on, because it’s what his father wanted.  In 2006, the trial court awarded Koontz damages for the time that the District illegally denied Mr. Koontz his permit and thus productive use of his property.  But the District appealed and seemed to prevail when it convinced the Florida Supreme Court that the Constitution does not protect property owners from extortionate demands for money.  But against the odds, Pacific Legal Foundation convinced the United States Supreme Court to review the decision.  The Court granted the petition and held in favor of Mr. Koontz, explaining “Extortionate demands for property in the land use permitting context run afoul of the Takings Clause . . . .”

The Supreme Court remanded the case back to Florida courts in 2013 to decide whether Mr. Koontz was entitled to damages.  Unsurprisingly, the Fifth District Court of Appeal affirmed the trial court’s damages award.  The District dug in its heels and appealed, but last month, the Florida Supreme Court finally denied the appeal.  And Wednesday, the District finally paid more than $600,000 in just compensation for the temporary taking—about half of which is interest for all these years waiting.  This is a nice post-script to a 22-year drama.