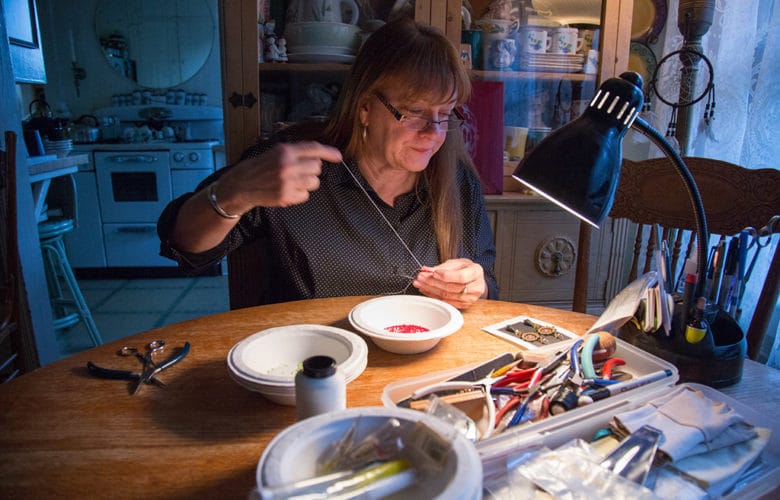 American Indian artist Peggy Fontenot, a member of the Patawomeck tribe, makes a living by selling her black-and-white photography and intricate beadwork at American Indian art markets across the country. A devotee of traditional techniques, she has received multiple awards at leading markets like the Autry Museum of the American West in Los Angeles and the Heard Museum in Arizona, as well as at the Santa Fe Indian Market, where she’s displayed and sold her work for years.

But recent changes in the Santa Fe Indian Market’s eligibility rules mean Fontenot and artists like her can no longer participate. These new rules, which took effect sometime in the last year without explanation or warning, are not only unfair – they also conflict with the spirit of federal and New Mexico law.

Fontenot’s situation is particularly vexing since just weeks ago she prevailed in a court challenge to a similarly unfair Oklahoma law that restricted her rights to free expression and to make a living. Despite that victory, she still finds herself blocked from selling her artwork in some American Indian marketplaces.

Under the Southwestern Association for Indian Arts’ (SWAIA) new rules, only members of federally recognized tribes are permitted to display at the Santa Fe market. The problem is that Fontenot is a member of the state-recognized Patawomeck tribe in Virginia and certified as an artisan by the federally recognized Citizen Potawatomi Nation.

Under the federal Indian Arts and Crafts Act of 1990, artists can label their art as “Indian-made” so long as they are a member of a federally or state-recognized tribe, or certified as an artisan by a tribe. Congress deliberately included certified artisans and members of state-recognized tribes, because it understood that there are numerous legitimate artists who for one valid reason or another are not members of federally recognized tribes. Excluding them would put their livelihoods at risk while doing nothing to protect the public from fraudulent artists.

To be sure, the federal and state laws do not require SWAIA, a private organization, to include certified artisans or members of state-recognized tribes. Instead, the group is free to choose which artists to include, so long as it stays within the bounds of anti-discrimination laws. But excluding certified artisans and members of state-recognized tribes violates the spirit of the more inclusive New Mexico and federal laws.

If the SWAIA rule were a law, it would almost certainly be struck down as unconstitutional. In 2016, Fontenot filed a federal lawsuit challenging an Oklahoma law that prohibited artists from marketing their art as American Indian-made unless they were members of federally recognized tribes. With help from attorneys at the non-profit Pacific Legal Foundation, Fontenot argued that, in addition to conflicting with the federal Indian Arts and Crafts Act, the Oklahoma law restricted her right to speak truthfully about her art and infringed on her right to earn a living.

The Oklahoma law had no relationship to protecting the public; legislators who are citizens of the federally recognized Cherokee Nation, and who seek to protect members of their tribe from having to compete with artists like Fontenot, drafted the legislation. Throughout the case, Oklahoma failed to produce any evidence that restricting Fontenot or others from the market was necessary to protect the public from fraud. In fact, the law was pure protectionism and a blatantly unconstitutional and improper use of the lawmaking process.

Fortunately, in March the court ruled in Fontenot’s favor, striking down the Oklahoma law. The U.S. District Court for the Western District of Oklahoma agreed with Fontenot that the U.S. Constitution prohibits Oklahoma from undercutting federal protections for certified artisans and members of state-recognized tribes for the benefit of politically favored artists.

It is sad that, instead of bringing Native artists and art lovers together to celebrate their art and heritage, SWAIA has chosen to exclude deserving artists like Peggy Fontenot. If SWAIA truly believes its mission is to bring “Native arts to the world by inspiring artistic excellence, fostering education, and creating meaningful partnerships,” then it should honor its past practices and embrace the inclusive spirit of federal and New Mexico law. Only then can everyone get back to focusing on the art and each other’s shared humanity.

This op-ed was originally published by the Albuquerque Journal on August 9, 2019.