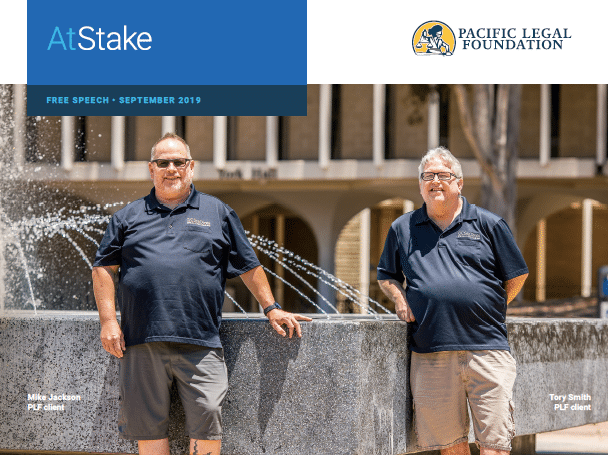 As reluctant members of Teamsters Local 2010, however, they hate being forced to give the union money against their will.

“We handle all logistics for campus special events, and I oversee a fine staff,” Mike explained. “When I was hired in 2013, I thought I had to join the union as a condition of employment. I didn’t question it.”

Neither did Tory, who’s worked at UCSD since 2006. “I’m no different than most people—no one likes having their money taken without their say-so,” he said.

So when the co-workers heard news reports about a Supreme Court ruling dealing with coerced union support, they thought their problems were solved. The 2018 decision in Janus v. AFSCME recognized employees’ First Amendment right to choose for themselves whether or not to financially support a union. That is, before the state can authorize payroll deductions, public employees must give their clear permission, and employers bear the burden of confirming that consent.

“I had the Supreme Court’s permission to tell the union to stop taking money out of my paycheck,” Tory said. “I thought it was a slam dunk.” It was a slam all right—on their rights, which Mike and Tory discovered when they tried to stop automatic payroll deductions to the union.

“When I asked the university’s human resources department to help me, they said they couldn’t because of a state law,” Mike recalled. “They told me I could only take my union questions to the union.”

That law is SB 866, a collection of Gag Rule statutes passed by the state legislature and signed into law by then-Governor Jerry Brown on the very same day as the Janus decision. The Gag Rule statutes make it illegal for employers and employees to discuss their rights concerning union membership, dues, or even the Janus decision; such discussions are allowed only with the union itself. That is, SB 866 is designed to intentionally keep California’s public workers in the dark about their constitutional rights and forces them to deal with a union that’s got every financial incentive to keep them in the dark.

Faced with no other choice, Mike and Tory went to their union to talk about their Janus-affirmed rights and asked to resign their membership. With no mention of their First Amendment right to choose, the union told the pair they’d have to pay dues until the collective bargaining agreement with UCSD expires—in 2022.

“The union said I can’t end payments to them even though the Supreme Court said I can. And the university said I can only talk about my union-related rights with the union,” said Tory. “I couldn’t believe government made a law that disobeys the Supreme Court just to hide my rights from me.”

Public employees have a right to truthful information about their constitutional rights. And a state cannot undermine this right by instituting Gag Rule barriers between employers and employees.

“This was not what the Court intended with Janus, and it is certainly not what was intended by the Bill of Rights,” said PLF attorney Timothy Snowball. “Our ability to exercise our constitutional rights should not depend on the whims of a biased union.”

Represented free of charge by PLF and the Liberty Justice Center, the firm that represented Mark Janus at the Supreme Court, Mike and Tory are fighting back in a federal lawsuit challenging the Teamsters’ insistence they remain members against their will. And, in an entirely original strategy, they’re also asking the court to strike down California’s Gag Rule statutes.

PLF’s unique legal theory is this: in order to exercise the right to choose to pay a union, public workers must know that right exists and have sufficient information to exercise it. And this burden falls squarely on government employers like UCSD, who must have employees’ clear and affirmative consent before any money is taken out.

“A Miranda Warning gives notice of our right to remain silent under the Fifth Amendment, so we can choose whether to exercise those rights during an arrest,” explained Snowball. “Similarly, public employers have an obligation to put public employees on notice of their First Amendment right to not support a union, before the government takes money from their paycheck for that purpose.”

A win will ensure California can no longer keep Mike, Tory, or any of the state’s one million public workers in the dark about their constitutional rights. Victory will also send a message to other states concocting unlawful schemes to circumvent Janus that they cannot enable union hijacking of employee paychecks at the expense of the First Amendment.

“This is just plain wrong, and somebody’s got to stand up and do something,” said Mike. “This isn’t about unions. This is about the right to choose what I do with my money—and the right to know my rights.”

To Our Donors: Employees have the right to decide whether to subsidize a union, and the state can’t enact Gag Rules to deliberately keep workers in the dark about their constitutional rights. Your investment in PLF empowers Mike and Tory to fight government efforts to muzzle their rights recognized by the Supreme Court. Thank you!

The Hill: California workers have constitutional rights — even if unions think they don’t matter September 10, 2019 I By DEBORAH LA FETRA