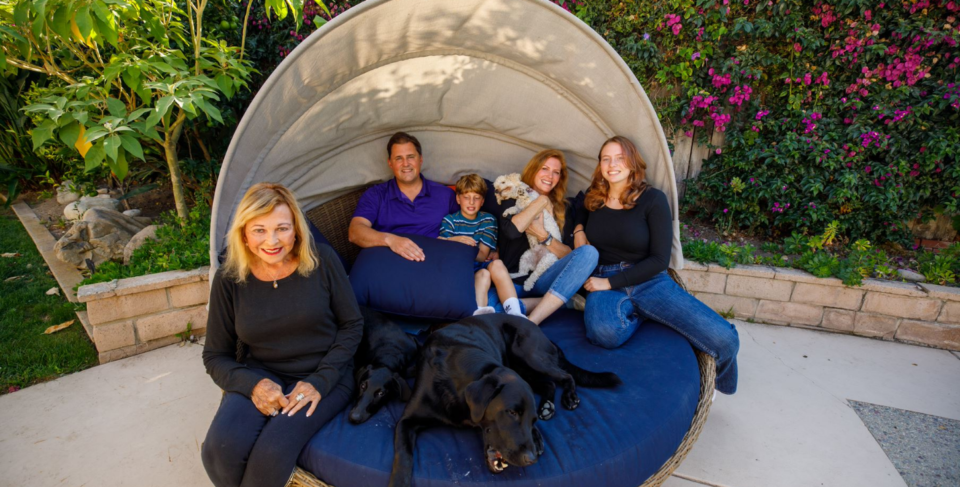 “To own property that we pay taxes on and then to have government rob us of our property rights is just wrong. That’s not what our country is supposed to be about.”

Elizabeth Riddick describes her mother, Renee Sperling, as her Rock of Gibraltar: always there to accompany and empower her daughter through life’s rough patches.

When Elizabeth needed a new place to live, for instance, Renee suggested Malibu and offered to help.

“She said, ‘They’re not making any more of this land.’ So, she and I bought this property together in 2004,” explains Elizabeth.

But when the time came for Elizabeth to return the favor and provide her mother a home on their property, government bureaucrats denied her plans and her rights. For years, Renee lived in the home she owned with her daughter. She graciously sold her interest in the house to Elizabeth and her husband, Jason, so they could live there and raise their three children.

“Jason and I always intended that my mom would live here with us whenever she was ready,” says Elizabeth.

By 2018, Renee was ready. But fulfilling her desire to age in place with her dog and her family while maintaining her privacy would be a challenge.

At age 82, Renee lives with a number of ailments, including glaucoma, arthritis, asthma, and osteoporosis. She is also afflicted with immunodeficiency, so a buffer from her grandchildren is medically necessary.

As the Riddicks weighed their options, they learned not only that California law gives them the right to build an Accessory Dwelling Unit (ADU)—commonly known as a “granny flat” or a backyard cottage—but also that new legislative reforms would make it easier to obtain a permit.The California legislature recognized ADUs as an essential component of addressing the state’s critically low housing supply because they provide affordable housing in neighborhoods where they’re most needed—especially benefiting family members, the elderly, and the disabled.

The new reforms reinforce ADUs’ importance to easing the housing crisis by removing costly and complicated barriers to the permit approval process. They also strip local government bureaucrats of unbridled discretion to delay or deny permits.

The Riddicks decided to build an ADU onto their home. They obtained the written support of their homeowners’ association and all surrounding neighbors. The Malibu Planning Commission itself even told Elizabeth and Jason their project is “like a posterchild for why the ADU law was created.” However, as the Riddicks forged ahead with their plans, it seemed as if the harder they worked, the more distant their goal became.

“We spent hours and days and weeks writing and drafting and fighting in discussions and meetings, and we spent $40,000 on geologic surveys and other permit requirements,” Elizabeth says. “It was extremely stressful.”

After dragging out the process for nearly three years, the Planning Commission denied the Riddicks’ application anyway. Commissioners claimed their proposal doesn’t meet the lot coverage limits and setback requirements under Malibu’s Local Coastal Program. Because California law bars local governments from imposing either condition on ADUs and fully preempts local restrictions, the Riddicks appealed to the Malibu City Council. They were again denied—and infuriated.

“You work really hard to have a home and a little bit of land. And you just want to do something on your land that is right for your family and helps relieve the housing crisis, and these bureaucrats deny you,” Elizabeth says. “To own property that we pay taxes on and then to have government rob us of our property rights is just wrong. That’s not what our country is sup-posed to be about.”

“A law that makes it easier for Californians to build on their own property and ease the affordable housing cri-sis is no good if local governments ignore it,” says PLF attorney David Deerson. “Cities, towns, and counties must stop putting up unlawful barriers that make it onerous or impossible for residents to use their own land to increase the supply of housing.”

Represented free of charge by PLF, the Riddicks are fighting back.

“I learned from my mom that you don’t get anywhere by giving in. You keep fighting. There’s no way I’m stopping,” insists Elizabeth. “This isn’t just about my mom’s guesthouse. It’s about doing the right thing.”

The way to make housing more affordable is to build more of it. A local government cannot impose arbitrary, discriminatory, or illegitimate building restrictions that defy state law and trample private property rights.

The Constitution guarantees the right of Americans to make economically beneficial use of their property to create new, much-needed housing. Your support for PLF ensures that Elizabeth and Jason Riddick— and all Americans—can fight oppressive government regulations that strip property rights and worsen the nation’s housing crisis. Thank you!