Blog > Businesses should have the right to join in democratic discussion

Businesses should have the right to join in democratic discussion 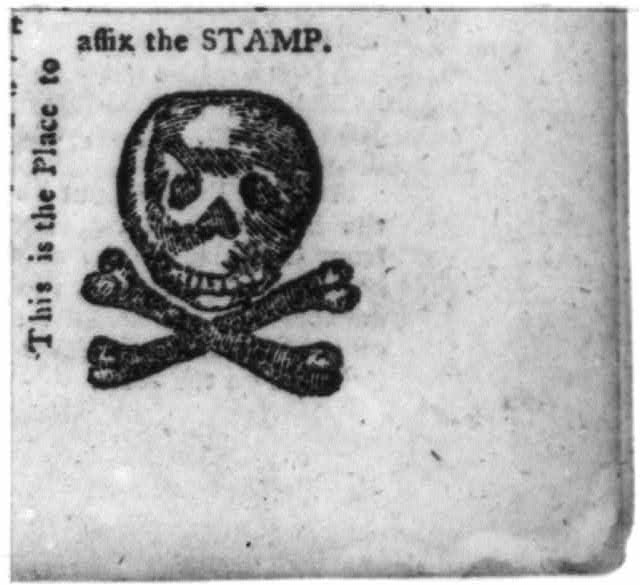 In 1765, Philadelphia printer William Bradford protested against the Stamp Act by printing this symbol in the spot where people were supposed to attach the required tax stamp. Bradford was complying with the law—while drawing people’s attention to the injustice of the tax. Bradford’s act was not unusual: business owners were at the head of the American Revolution, and they saw no difference between the right to earn a living and other kinds of freedoms—or between commercial advertisements and other kinds of free speech.

In 2011, the U.S. Department of Transportation adopted a regulation called the “Total Price Rule,” which requires airlines to print the total amount that a plane ticket costs, instead of printing the airline’s charge separately from the taxes and fees. And the regulation forbids the airlines from printing the taxes “prominently.” That means they’re not allowed to print it in the same size, or larger, typeface than they print the total cost of the ticket. Spirit, Allegiant, and Southwest Airlines sued, arguing that this rule violated their First Amendment rights by censoring their criticism of the government. Sadly, the D.C. Circuit Court of Appeals ruled this restriction constitutional: government can restrict how the airlines present this information, regardless of the fact that it silences basic political expression, because the Department is trying to prevent consumer confusion. Under this rule, though Bradford’s skull-and-bones symbol could also have been censored. Is that really what the First Amendment’s authors intended?

Welcome to the Twilight Zone world of “commercial speech,” where courts try to divide and subdivide speech into different categories based on the content and the speaker, in order to give strong constitutional protection to “pure” speech and diluted protection to “commercial” speech. What is the difference between commercial and non-commercial speech? Nobody knows—as we pointed out in this blog post, it’s not possible to draw a principled distinction between the two, and courts have tried, and failed, time and again. They also haven’t come up with a consistent explanation of what kinds of restrictions on commercial speech are allowed.

Worse, in a case called Zauderer, the Court upheld the constitutionality of forcing businesses to print “factual disclosures” in their advertisements, and declared that such disclosure requirements are subject to still another constitutional rule—a pro-government “reasonableness” standard. That may not sound like a problem, until you realize that it’s rare for any statement to be a pure, objective fact. More often, government forces people to disclose “facts” that they dispute, or that are misleading when taken out of context, or are confusingly worded. And government tries to expand this Zauderer rule to allow greater and greater restrictions of what businesses can say—and more and more power to force businesses to say what government wants. In the Spirit Airlines case, the court used this Zauderer rule to uphold a restriction that didn’t just require disclosure, but also restricted what the airlines are allowed to say.

We filed this brief today urging the Supreme Court to take up the Spirit Airlines case and protect the right of all businesses to speak out, and to inform consumers about the burdens government imposes on them. It’s time to abandon the commercial/non-commercial speech distinction, and to protect all free speech and all speakers equally; it’s time to allow our wealth-creating business owners the equal right to have their say in our political debates, just as they had in William Bradford’s day.