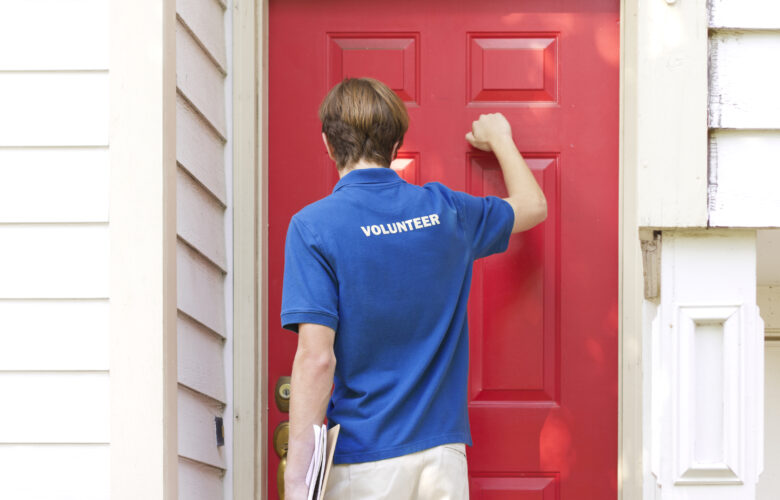 Editor’s Note: This piece is from our friends at the Institute for Free Speech, about a new lawsuit they have filed challenging California’s restrictions on freelancing.

It’s another bright and sunny day in California. Election season is around the corner, and things are heating up. Candidates are running advertisements on television, announcing their positions in newspapers, and connecting with voters on social media, all in an exhaustive attempt to make their case for office. But these efforts often fail to connect. Voters roll their eyes at campaign ads interrupting Olympic competition and cringe-inducing videos of politicians participating in the latest dance trend or making “hip” jokes on Twitter or Snapchat. There is, however, one method of communication that is reliable, personable, and proven. It’s a practice as old as democracy itself––canvassing.

Canvassing is the practice of directly contacting individuals “in order to solicit orders or political support or to determine opinions or sentiments.” Campaign workers canvass voters to promote candidates, ballot measures, or petitions. They walk the streets and knock on doors to talk with neighbors about political and social issues. It is an inherently community-oriented activity, relying on the power of conversation and the free exchange of ideas to motivate action.

On this beautiful day, however, most canvassers in California are salespersons peddling consumer products and services. Californians will hear their pitches touting makeup and kitchen knives, but they will not likely hear their ideas about local elections, education reform, or religious liberty.

What happened to the political canvassers? California legislators largely crowded them out through changes to the state’s employment law. For legal purposes, workers are classified as either employees or independent contractors. There are advantages and disadvantages of each classification for both hirers and workers. Hirers exercise greater control over employees than independent contractors but are often responsible for unemployment insurance taxes, administrative costs, worker’s compensation, sick leave, and other obligations. Meanwhile, employees can receive the aforementioned benefits and protections, but they do so at the expense of freedom and flexibility in hours and working conditions.

In 2019, California enacted Assembly Bill 5 (“AB 5”), which codified a new legal test to classify California workers tilted heavily against independent contracting. Canvassers, who were typically independent contractors under the old legal test, would now be “employees”—if anyone could afford to hire them. But AB 5 exempts numerous work categories, including “direct sales salespersons”—people who demonstrate or sell consumer products in homes or outside of a storefront, and whose pay is tied to their sales or output rather than time. Essentially, commercial canvassers. Also exempt are workers who deliver literature that meets California’s definition of a “newspaper”—broad enough to cover the Los Angeles Times, but not a voter guide. These selected favorites are practically assured of remaining classified as independent contractors.

The Legislature did not choose exempt workers from AB 5 at random. To avoid being saddled with new costs, powerful industries organized extensive lobbying efforts to ensure that their workers would be classified as independent contractors. The Direct Selling Association worked with AB 5’s sponsor to enact the exemption for canvassers who speak about “consumer products.” Meanwhile, the California News Publishers Association lobbied for an exemption for the newspaper industry, arguing that classifying their workers as employees would cost $80 million.

Ironically, one group that lacked the political muscle to get an exemption was campaign workers. If they want to canvass as independent contractors, they need to sell products instead of candidates and ballot measures. If they want to deliver printed material as independent contractors, they need to work for a major newspaper. Only “employees” can now provide canvassing services to California campaigns. Unable to afford the financial obligations of employment and fearing the drastic consequences of “misclassifying” workers under AB 5, political canvassing operations have receded. The law is strangling political speech—while leaving commercial speech free to roam.

That the Legislature somehow forgot about political canvassing when making its exemptions is unsurprising. Elected officials hold an incumbent’s advantage in elections, owing to superior name recognition, access to financial and government resources, and a presumption of electoral success. Those advantages make canvassing less essential for incumbents than challengers and political newcomers. A regulatory system that suppresses personalized campaign efforts also serves to stifle grassroots movements and citizen-initiated ballot measures, giving incumbent politicians an even tighter grip on government.

Fortunately, it doesn’t matter whether the Legislature forgot about campaign workers or consciously left them out of AB 5’s exemptions. Nor does it matter whether favoring commercial over political canvassing is good or bad policy. At bottom, AB 5’s preference for consumer products and certain newspapers is a content-based restriction on speech, which is almost always unconstitutional. The Institute for Free Speech has also filed a federal lawsuit against California, on behalf of a local nonprofit, a related political committee, and a group that provides canvassing services. Our complaint in the case, Mobilize the Message, LLC v. Bonta, notes, “the right to knock on doors on behalf of candidates, or gather signatures to qualify ballot measures, does not require a legislative favor. It already enjoys the First Amendment’s protection, which forbids content-based speech discrimination against political campaigns.”

As PLF fans know, this is not AB 5’s only example of unlawful content-based speech discrimination. We’re eagerly awaiting the outcome of American Society of Journalists & Authors v. Bonta, PLF’s challenge to AB 5’s discriminatory treatment of journalists and videographers relative to its more favorable treatment of other creative professionals.

We look forward to putting all Californians on an equal footing when it comes to their speech, and to renewing access to the state’s democratic process.

Ben Cross served as a Bradley Summer Associate Fellow at the Institute for Free Speech in the summer of 2021.

California passed a law trying to “fix” AB-5, but simply showed the damage its causing freelancers September 01, 2020 I By JIM MANLEY