Can "pure" motives save an unconstitutional law?

The town of Gilbert, Arizona severely limits your right to post signs if you are inviting the public to your church. But those same restrictions do not apply if you are a politician touting your candidacy. According to Gilbert, its Sign Code is perfectly compatible with the First Amendment because it does not discriminate on the basis of content. Judge for yourself: 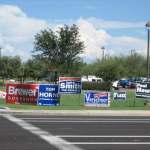 This case is now in the United States Supreme Court as Reed v. Town of Gilbert, Arizona. One of the questions the Court will consider is this: Is the restriction on speech content-based (more constitutionally problematic) or content-neutral? You probably looked at the pictures and thought that this was a content-based restriction of speech (such as a ban on all picketing except for labor picketing). Yet the Ninth Circuit ruled against the church, holding that the law was content-neutral (like a ban on all loudspeakers), because the church offered “no evidence suggesting illicit motive or bias on the part of the City.” That was an odd ruling, because the text of the Sign Code explicitly distinguishes between political signs and qualifying event signs (e.g. church signs). Churches must display smaller signs, fewer signs, and for a shorter period of time.

So the church presented the best evidence of content-based discrimination: The law itself.

Pacific Legal Foundation argued that point today with this brief supporting the church at the Supreme Court. The church should not have to present evidence of impure motives when the text of the law itself imposes different standards for different content. The Ninth Circuit faults the church for failing to find a dog that didn’t bark, but who needs that when the crime is there for all to see? PLF hopes that the Supreme Court takes this opportunity to reaffirm the principle that legislative text is superior to a legislator’s motive—and that the Constitution is superior to both.

For more on Pacific Legal Foundation’s work on the First Amendment, see here, here, and here.