Central Coast Forest Association, supported by Pacific Legal Foundation as amicus curiae, has won a long running procedural battle in the California Supreme Court. The unanimous Court ruled that California’s Endangered Species Act allows interested parties to petition for a species to be removed from the state’s list of endangered species solely on the ground of error in declaring it endangered in the first place. 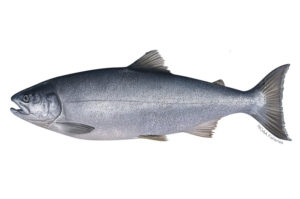 CCFA argues that Coho are not native south of San Francisco Bay.

This seems like a fairly straight forward proposition, and fully consistent with practice under the federal Endangered Species Act. And yet it has been almost 13 years since CCFA first petitioned the California Fish and Game Commission to delist Coho salmon south of San Francisco Bay, on the ground that they are not native to that region and ineligible for protection under the state ESA. During those many years, the Commission has twice refused to consider the petition, and twice been told by the Superior Court to do so. Then the California Court of Appeal ruled that petitions to correct erroneous listings are not even permitted under the California ESA.

In the meantime, I recorded a podcast with the San Francisco Daily Journal that delves into the procedural aspects of this case, available at the Journal’s website here (dated March 3, 2017), on you can listen directly here or below.