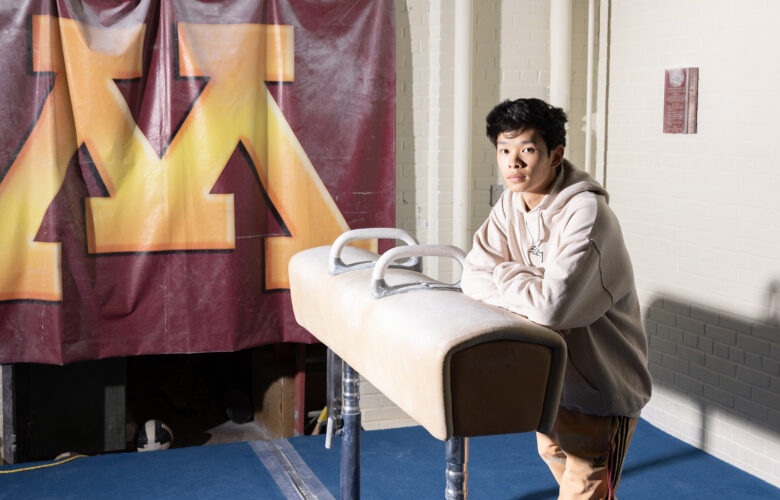 Like all incoming college freshmen, Evan Ng was excited to begin the next chapter of his life.

Thanks to COVID-19, it wouldn’t be the experience he had been envisioning. But whether his academic classes would be in person or not, the University of Minnesota was giving him the opportunity to do what he loved: gymnastics.

Since he was six years old, Evan has been a competitive gymnast. As a child, he was active and energetic and played a host of different sports from swimming to soccer, but there was something about gymnastics that stuck out from the others.

He still remembers one of his earliest gymnastics meets. At just nine years old, he had been training for a developmental national team. Still a young kid competing against other boys as old as 13, his coach told him not to have any grand expectations. He was counseled to focus on giving it his all and see what happens. In the end, Evan came in first place.

Competition makes people the very best versions of themselves. And for Evan, the competitive aspect was a huge draw. But he wasn’t in it just for himself. He loves the camaraderie of being part of a team. And it was the team, and their coach Mike Burns, that drew him to the University of Minnesota.

But he hadn’t even been on the team for one year before the university jeopardized Evan’s dream at the school he loved so much.

When Evan began considering colleges during his junior year of high school, he had several enticing offers on the table from other schools. But it was Minnesota coach Mike Burns who tipped the scales in favor of Minnesota.

After they first met, Coach Burns took a personal interest in Evan’s career. Nearly every week he called to check in and see how he was doing. Evan even had the opportunity to visit the campus to experience life at the University of Minnesota firsthand.

While the gym on campus wasn’t as big nor as fancy as the other schools, it felt like home, where he was used to training in an intimate gym and the coaches were able to observe each athlete. College was going to be a big-enough adjustment on its own, and Evan really didn’t want to give up this aspect of his pre-college training.

From the beginning, his college career was off to a rough start. Thanks to COVID, freshmen had to wait two weeks before they were allowed to move on campus. The one class he was supposed to have in person, bowling, was quickly moved to an online course. To make matters worse, Evan had sustained a shoulder injury during his senior year of high school and was having surgery right around the time the semester began.

While sitting in the doctor’s office with his father waiting to get an MRI on his shoulder, he got a text from campus administrators who explained that all team members, coaches included, were required to join an emergency Zoom call in 30 minutes.

The administrators didn’t waste any time—as soon as the call started, they immediately told the team that men’s gymnastics, along with men’s tennis and track, was being cut from the school’s roster of athletic programs.

It felt like the rug had been pulled out from underneath them. Neither the coaches nor students had any idea that this was going to happen.

The university’s initial claims of financial necessity didn’t hold water. The annual athletics budget is around $125 million. While it’s true that halting (and then delaying) fall sports, especially football, could mean tens of millions of dollars in lost revenue, the sports being eliminated would save only $1.6 million a year—about $825,000 for men’s gymnastics. Furthermore, the gymnastics program’s endowment of more than $900,000 largely supports the team’s scholarships.

Instead, they found another reason to justify cutting these teams: There were too many men participating in sports at the school.

Administrators had mistakenly interpreted Title IX—the federal equal opportunity in education statute—believing it required that the number of male student athletes be the same ratio as the male student body.

For the 2020-21 school year, men made up a greater percentage of athletes (49.76%) than in the overall undergrad enrollment (46.77%). According to the school, male athletes were “overrepresented.”

Something didn’t sit well with Coach Burns and his team. Equality before the law is a constitutional guarantee for publicly funded schools. That and Title IX guarantee that the school couldn’t eliminate sports teams solely due to the sex of the athletes. The university claimed they had to cut men’s teams in order to comply with Title IX mandates intended to promote equality. But their decision did the opposite.

The gymnastics season hadn’t even begun yet, and Evan had to go into it nursing a healing shoulder injury and with the understanding that the team’s time was limited. With his shoulder in rehabilitation, he was unable to maintain a normal practice schedule and was able to represent the University of Minnesota in only two competitions.

It didn’t seem just that Evan and his teammates were now going to be missing out on opportunities that would have set them up for success in their future careers.

If the team had a track record of performing poorly in competitions, that would be one thing. But the Golden Gophers had historically performed extremely well. And it surely wasn’t poor academic performance. Overall, the team had the highest GPA of any of the school’s other sports teams in 2021. Five of its members had earned 4.0s.

Put simply, the university cut the men’s teams for the sole purpose of establishing a sex-based quota—a clear violation of equal protection and Title IX. Contrary to the school’s justification, cutting sports programs on the basis that it has too many male athletes is precisely what Title IX forbids.

The U.S. Department of Education’s Office of Civil Rights found absolutely nothing wrong with the school’s 1.47% overrepresentation of women athletes that had occurred in 2018. There would be no reason for them to take issue with the current situation.

But the university continued to claim that the gymnastics, track, and tennis teams had to be cut in order for the school to comply with Title IX rules.

The team felt powerless. Some transferred schools. Evan wasn’t sure what he should do, and he did think about quitting gymnastics altogether. But he loved his team and his school.

The university did soften the blow by allowing those with scholarships to keep them, but that wasn’t the point. Being a member of the varsity team gave Evan and his teammates great opportunities. They weren’t in this just for the scholarships, they wanted to compete—an opportunity that was taken away from them all because of their sex.

Of course, the school didn’t go after other men’s sports like football or baseball, which made the men’s gymnastics, tennis, and indoor track teams feel especially singled out.

Evan did not feel like all sports teams on campus were treated equally. He said, “They’re not valued the same, even though all athletes work just as hard, if not harder, to get where they are.”

It’s no real surprise that universities across the country usually allocate more of their athletic funds to sports like football and basketball, but gymnastics is no less important than the other sports.

Evan wasn’t ready to abandon his dream of competing for the University of Minnesota, and he didn’t want his team to give up on their aspirations either.

Intimidating as it may have been, Evan made the courageous decision to stand up and fight back against his own university administration’s decision to ignore the equal protection clause of the Fourteenth Amendment by instituting sex-based quotas. And Pacific Legal Foundation was not going to let him do it alone.

PLF, along with the assistance of attorney Samuel Diehl of CrossCastle PLLC, is representing Evan free of charge in his quest to stand up for his constitutional right to be treated equally and not judged based on immutable qualities like sex.

“The university’s focus on reaching a ratio of male and female athletes identical to the ratio of male and female undergraduates is nothing more than the creation of sex-based quotas. Using quotas is constitutionally dubious, not required by Title IX, and suffers from common sense problems by ignoring the preferences and complexities of students as individuals.”

“The university isn’t creating sex-based quotas for the marching band, drama department, or classes in general, so why athletics?”

When Evan decided to attend the University of Minnesota, he hadn’t planned on taking on the school in court.

“I’ve never really been involved in lawsuits; it is a little bit intimidating,” he explained.

Difficult as this battle may be, his conscience demanded that he stand up for his constitutional guarantee to equality before the law, and not just for himself.

Evan wants to make sure younger generations of men’s gymnasts have an equal opportunity to compete and represent their school without being penalized for immutable characteristics they didn’t choose, like their sex. 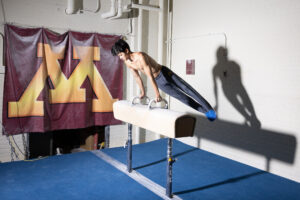