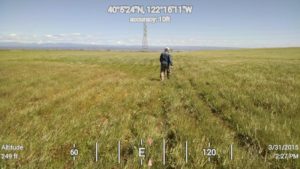 The scene of the plowing, showing what the government insists are “small mountain ranges.”

Last Thursday, the chairmen of the House Agriculture and Judiciary Committees sent this letter to Attorney General Jeff Sessions, stating their concern that the Clean Water Act is being used to regulate and enforce against plowing and other normal farming practices that are not subject to permitting requirements under the Act:

The prosecution of Mr. Duarte raises concerns that the Congressional intent behind the farming exemptions in the statute is misunderstood. Specifically, it is the Agriculture Committee’s view that even occasional farming activities, including grazing, qualify as “normal” farming under the statutory exemption, and also are part of an established operation for purposes of the exemption. Further, it is the Committee’s view that the activity at issue in this case constitute plowing for the purposes of the exemption.

Chairmen Conaway and Goodlatte than ask:

Is it appropriate to seek reduced penalties where the alleged violation is based on a novel or strained interpretation of the underlying statutory authority?

Novel or strained indeed. Accepting the Justice Department’s arguments in this case, a federal court ruled that plowing is not exempt from the Act (under a regulation that exempts plowing from the Act) if the plowing results in moving soil from side to side.

The chairmen’s letter comes on the heels of multiple congressional comments and questions about the case, including an op ed written by Speaker of the House Paul Ryan, a critical report published by the Senate Committee on Environment and Public Works, an exchange between incoming EPA Administrator Scott Pruitt and Iowa Senator Joni Ernst (in which Pruitt commits to working with the Army Corps and Justice Department to stop federal agencies from trying to regulate ordinary farming practices), and President Trump’s remarks about the misuse of the Clean Water Act to regulate puddles and ditches on farmers’ land, and treat America’s wonderful small farmers like major industrial polluters.