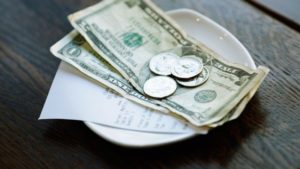 Judges often defer to the government’s interpretations of its own power. PLF fights this trend because it upsets the balance of separated powers and threatens liberty. But recently, in a case called Oregon Restaurant and Lodging Association v. Perez, judicial deference slumped to a new low.

The case is about pooling tips. But it’s also about much more–the proper role of courts, the power of unaccountable bureaucrats, and our commitment to limited government. The spat began over “tip credits.” Under the Fair Labor Standards Act, businesses can use tips to reach their minimum wage obligations. If they use this tip credit, though, they must follow certain tip-sharing rules. Namely, if a business uses the tip credit, it can’t require tip earners to share tips with workers that don’t get tipped, like kitchen staff.

The Ninth Circuit has confused two different types of silence. Courts have long held that agencies can fill in the gaps left by ambiguous terms in a statute. For example, the Sherman Act forbids contracts “in restraint of trade.” If Congress doesn’t define an ambiguous phrase like this one, then federal agencies can fill in the details. We’ve discussed the problems with this gap-filling principle before, but what the Ninth Circuit proposes is even worse. The Ninth Circuit would allow agencies not to just fill gaps in the law, but also to expand the law’s actual reach. If a city ordinance says, “no pet lions in the park,” does that imply that the parks department can also prohibit pet dogs, cats, and turtles? Authority to fill a pothole doesn’t include the authority to transform a country road into a six-lane freeway.

In short, the Ninth Circuit says that if Congress chooses to leave you alone, that doesn’t mean you’re free to do as you like; it means a federal bureaucracy is free to do with you as they like. Instead of a presumption of liberty, it’s a presumption of boundless government control. That doesn’t square with our basic commitment to human freedom.