Earth to the Feds: dry New Mexico should not be designated “critical habitat” for jungle-loving jaguar 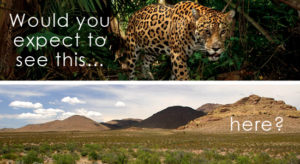 Looking for big cats in all the wrong places

Calling New Mexico essential to the conservation of the jaguar is kind of like calling your garbage can essential to a raccoon just because you found one snooping through the garbage once. That’s why PLF filed this opening brief challenging the jaguar critical habitat designation in New Mexico on behalf of New Mexico Farm & Livestock Bureau, New Mexico Cattle Growers’ Association, and New Mexico Federal Lands Council.  The designation has real consequences for their members who will needlessly face additional regulatory burdens when seeking federal permits for activities in the area. The designation also creates new regulatory hurdles for forest-fire management strategies, such as prescribed burns, leaving members of the plaintiffs’ organization at heightened risk in a dry, fire-prone region. It will also likely impede development of community infrastructure like roads and pipelines as well as range improvements for cattle ranches that are important to the local community and economy.

Recognizing the often heavy burden that critical habitat designations places on humans, Congress amended the Endangered Species Act 38-years ago to limit where the U.S. Fish and Wildlife Service (FWS) could designate critical habitat: The land must either be “occupied” by the species when it is added to the endangered or threatened species list. Or it must be “essential” to the species survival.  Unfortunately, either in zeal or recklessness, the federal government too often forgets these limits and designates vast expanses of land as critical habitat, like when it recently designated thousands of acres of dry, arid land as critical habitat for the jaguar—a species that thrives in a wet, tropical habitat.

The designation defies common sense and the requirements put forth by Congress. First, it claims the designated areas in New Mexico were occupied at the time of listing in 1972 based on sightings of two jaguars near the New Mexico border more than twenty and thirty- years later.  The government argues that since the lifespan of a jaguar is around 10 years, that a sighting up to 10 years after the listing should support a conclusion that the area was occupied in 1972.  But the government relies on sightings 20 and 30 years later!  Perhaps this is why the final rule designating parts of New Mexico repeatedly asserts only that the designated habitat areas “may” have been occupied.  Indeed, the government even acknowledges in the rule that the lack of jaguar sightings in 1972 as well as expert opinions “suggest that jaguars in the United States had declined to such an extent by that point as to be effectively eliminated.”

Since it lacks evidence to support its conclusion that the area was occupied by jaguars in 1972, the government also states in the rule that the areas are “essential” to the preservation of the jaguar.  But again, that determination contradicts the evidence.  For example, the rule explains that the area’s importance to the jaguar is only “marginal” and “secondary” to the jaguar’s primary habitat—lowland wet communities, including swampy savannas or tropical rain forests—across Central and South America.  The nearest breeding jaguar population is 130 miles south of the Mexico-United States border. In fact, the government anticipates in its designation that New Mexico would only rarely support “some individuals during dispersal movements” and “perhaps in some cases with a few resident jaguars.”