Did I ever tell you how lucky we are?

I’m often asked whether I’m optimistic or pessimistic about freedom in the United States. Actually, I’m asked in dark tones whether there’s any hope for the country….

Of course the answer is yes.

The Fourth is a good time to weigh the challenges we face and the advantages we enjoy. And that’s best done by comparing our situation to those of our predecessors. While Jefferson was writing the Declaration of Independence in Philadelphia 238 years ago, his country was under siege. The British had burned and looted Norfolk in January, and would soon occupy New York City. They had just evacuated Boston after occupying it for almost a year. When Jefferson wrote that King George had “plundered our seas, ravaged our Coasts, burnt our towns, and destroyed the lives of our people,” he was not exaggerating.

But the founders weren’t only facing the prospect of war against the largest military in the western world—they also lived at the Speed of The Horse. Theirs was an era of slow communication, poor education, and no automation. To equip the Continental Army was enormously expensive in terms of man-hours; it was done by hand-blacksmithing and animal-powered farming. And the likelihood of a letter being lost, a messenger being delayed, a message being intercepted, was so great that Jefferson and Madison took to writing each other in code. There were no photos, no cars, not even hot-air balloons. Given these challenges, the idea of mounting a revolution in the name of liberty would, in retrospect, seem nearly absurd.

In fact, when Jefferson wrote his famous Dialogue between his Head and his Heart, his Heart chided his Head that had they rationally calculated their chances, the Patriots wouldn’t have made the attempt: “If our country, when pressed with wrongs at the point of the bayonet, had been governed by its heads instead of its hearts, where should we have been now? Hanging on a gallows as high as Hamans. You [heads] began to calculate & to compare wealth and numbers: we [hearts] threw up a few pulsations of our warmest blood; we supplied enthusiasm against wealth and numbers; we put our existence to the hazard when the hazard seemed against us, and we saved our country.” 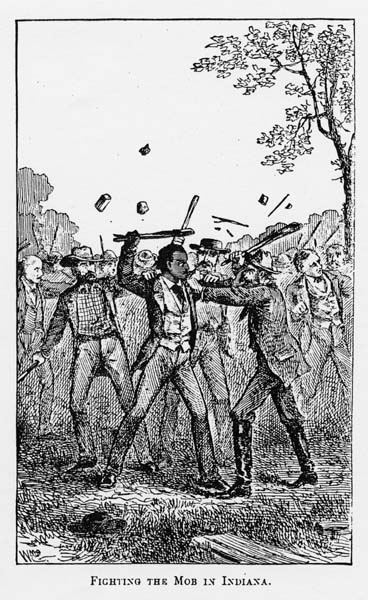 Or consider the situation of the Abolitionists in, say, 1858. The Supreme Court had issued the Dred Scott opinion, striking down the Kansas-Nebraska Act and guaranteeing the spread of slavery to the west. A couple years before, the Buchanan Administration had used the Anthony Burns case to make clear that it would put the nation’s full might into upholding slavery. A little known lawyer named Lincoln was soundly defeated in his challenge to Senator Stephen Douglas, who argued that the Declaration was meant only for white men, and that western whites should decide for themselves whether to enslave blacks. William Lloyd Garrison, despairing for the country, was burning the Constitution during his speeches. Charles Sumner was out of Congress, recovering from injuries suffered when he was beaten on the floor of Congress by a South Carolina Representative.

The idea of slavery ending forever seemed absurdly radical. Nearly every civilization up to that time had incorporated slavery; the British had only ended it 15 years earlier; France, after briefly abolishing it, had reinstituted it. Garrison’s Liberator, the most outspoken antislavery paper, had few subscribers, and circulating it in southern states was illegal. Georgia put a $5,000 bounty on Garrison’s head, and the Post Office wouldn’t carry it. Antislavery speakers weren’t just egged and stoned at their speeches. Mobs would burn down the buildings where they spoke…even in the north. Just getting the word out about slavery’s evils was an enormous challenge at a time when censorship even reached the floor of Congress.

In the 1960s, desegregationists faced vastly worse obstacles than we can readily imagine. They were lynched and burned out of their homes. Blacks were terrorized if they tried to vote or speak their minds; whites were buried in shallow graves.

All of these people triumphed in the face of hardships categorically worse than those we face today.

I don’t mean to diminish the challenges we face. They are real, and people are genuinely suffering under the weight of bloated, restrictive government. Obamacare is a very serious threat to medicine, innovation, and individual freedom; environmental regulatory agencies are stealing people’s land and ruining them financially with little due process; schools are picking students by skin color; entrepreneurs are being deprived of the right to earn a living. Lawyers, judges, and law professors have lost the very vocabulary of freedom. And Progressives are working hard to ensure that the next generation never learns what freedom even means.

But when we make the case for free markets, private property rights, limited government, racial equality, and the principles of liberty, we have advantages our predecessors could only have dreamt of. We have instantaneous worldwide communication. We have friends and allies in every state. We have libraries of writings by the greatest thinkers. And we are so prosperous that the average American lives better than the emperors of the ancient world could ever have imagined.

And we have tremendous victories. We have the growth of freedom over the ages and a robust legal and constitutional tradition that our predecessors, against the odds, built for us. In their day, the fight for freedom required vastly more sacrifices than in our own. We should take comfort in that—and resolve to work harder to realize the dream.

In 1981, Ronald Reagan spoke movingly on the question of whether the dream of freedom was really possible—at a time of economic recession, Iranian terrorism, and at a time when Soviet communism still threatened the free world with domination. His answer, of course, was yes.

Today, we have far better reason to believe. Let us celebrate—and then get back to work.