PLF and Western Mining Alliance have filed an amicus brief in the Ninth Circuit case Bohmker v. Oregon. In the brief, we argue that federal mining policy preempts Oregon’s ban on a federally-approved and encouraged mining practice. 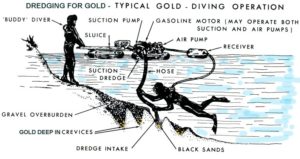 Part of having a federalist system of government is deciding which level of government gets final say when federal and state laws conflict over shared subject matter. The Supremacy Clause of the U.S. Constitution establishes an easy-to-apply tie-breaker: the federal government wins. Although fans of individual liberty are probably well-past tired of hearing that phrase, the Supremacy Clause serves an essential function and our system of government would be a mess without it. In addition to making our two-level government possible, federal supremacy protects individual rights when state governments turn predatory.

For example, the Supremacy Clause protects individuals and businesses from the no-win situation in which conflicting state and federal regulations make it impossible not to break the law. In those cases, state laws are preempted by federal law. Likewise, federal supremacy ensures that, in some fields of regulation, Congress can prevent the states from adding another layer of potentially costly and repetitive regulation onto the backs of individuals and businesses toiling in a regulated industry. Federal supremacy also means that when the federal government authorizes you to do something, a state can’t prohibit you from doing it.

Apparently, that’s news to Oregon. For nearly 150 years, federal law has expressly encouraged the “free and open” exploration for and extraction of valuable minerals from federal lands. Although the Supreme Court has confirmed that states may address the environmental side-effects of mining on federal land within their boundaries, states still cannot ban mining on federal land or pass laws significantly obstructing the objectives of federal mining laws. Regardless, Oregon passed a law prohibiting the use of all motorized mining equipment in its rivers and streams. The goal of Oregon’s law was to outlaw “suction dredging,” the only profitable method of mining gold from streambed deposits. Suction dredging uses a small, lawn mower-sized motor and an underwater vacuum hose to suck up and filter gold out of streambed sediment. Federal law allows it—encourages it, even. But if suction dredging remains outlawed under Oregon’s law, all of Oregon’s streambed gold will stay right where it is, and a lot of miners will be out of a job and will lose the value of their mining claims.

Some of those miners sued the state in the federal district court of Oregon, but the court said, essentially, that so long as the miners could go dig with their hands and shovels, the mining ban is not preempted by federal mining law. Anything short of that, the court held, could be characterized as an environmental law that the Supreme Court has said is not categorically preempted. But the district court entirely skipped over the part where it should have considered whether the ban in fact conflicts with federal objectives.

Now on appeal to the Ninth Circuit, PLF and our friends at Western Mining Alliance have filed an amicus brief in the case. In the brief, we point out how the district court badly misread the law on federal preemption, and we argue that Oregon’s law does, in fact, significantly conflict with the federal objective of keeping mining “free and open” and is therefore preempted.