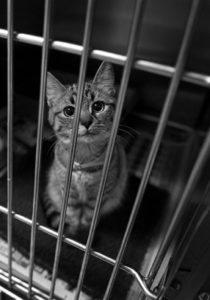 In its never-ending quest to waste our money on useless and unconstitutional endeavors, the United States Fish and Wildlife Service (FWS) has picked a fight with cat lovers in Key Largo, Florida. In the name of protecting rats—I am not kidding—the FWS implemented a “pest” management plan in the Keys—basically, a plan to kill cats (the “pests” in the feds’ eyes) in order to save rats.

The FWS hatched this plan to combat perceived threats cats pose to endangered wildlife, including the Key Largo woodrat, within the Florida Keys National Wildlife Refuges Complex. In other words, because cats chase and kill rats, the federal government decided to spend hundreds of thousands of dollars, and criminally prosecute cat owners, for allowing their cats to do what thousands of years of evolution have trained the cats to do—chase and kill rats. Watch an old Tom and Jerry or Itchy and Scratchy episode if you’re unfamiliar with what cats and mice do; once again, the federal government demonstrates that it is oblivious to common sense.

But it gets worse.

The FWS has not limited the cat trapping program to federal lands, but instead has taken to trapping cats outside federal property, an obvious overreach beyond the federal government’s authority. The most well-known resident to clash with the federal government regarding this overreach is Captain Spencer Slate. Slate, a well-known local scuba diver who runs a very successful business on Key Largo, received a written citation threatening jail time when the FWS captured his pet cat Rocky for allegedly wandering onto federal land.

Captain Slate did what all good men and women would like to do when faced with an outlandish prosecution by the feds—he took them on, and won. Slate represented himself in federal court and the federal judge found him not guilty of having his cat roam on to federal property. In fact, Slate explained that the feds had caught his cat outside federal property by setting a trap outside the federal park, on land within a stone’s throw of his own private property. Mr. Slate’s case was later dismissed, but the possibility of the FWS’s continued overreach is ever-present as long as the federal government’s cat-catching strategery remains in place.

When FWS agents prowl off of federal land to trap private citizen’s cats, their actions implicate a number of constitutional clauses, including the commerce, takings, property, and due process clauses of the United States Constitution.

This is not the first time the federal government has engaged in outlandish practices relating to Key Largo residents and their cats. In 2008, the United States Department of Agriculture (USDA) trapped cats—later to be euthanized—in an effort similar in design to the current program ran by FWS. The USDA shut down its program following an investigation by a local news station exposing the federal government’s despicable tactics.

One of Pacific Legal Foundation’s primary objectives is to ensure private property is protected from government overreach like this. We will watch for any further developments closely, and look for opportunities to push back when those opportunities arise.