Thanks to a lawsuit filed by PLF, the U.S. Fish and Wildlife Service yesterday issued a proposed rule to remove outdated and counterproductive regulations that hurt golden parakeet conservation efforts by creating unnecessary red tape for U.S. bird breeders. 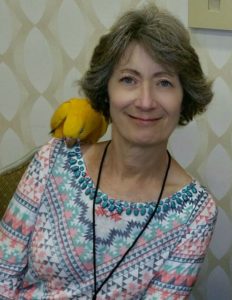 Under the proposed rule, AFA member Nancy Speed will be able to breed larger flocks of the golden parakeet.

With the newly proposed rule, the federal government has now acknowledged that the golden parakeet’s status has improved, and that it should be reclassified as only “threatened.”  One reason for that improved status is that golden parakeets are less likely to be trapped in their native Brazil habitat, because breeders of captive populations have depressed incentives for smugglers by providing legal and affordable options for bird collectors. In other words, private breeders are helping conserve the bird.

Because of the bird’s improved status, the American Federation of Aviculture (AFA), a nonprofit that educates the public and represents the interests of bird owners and breeders, filed a petition to delist the golden parakeet in August 2014. AFA also asked that the government alternatively reclassify it from endangered to threatened and remove counterproductive restrictions on trading captive populations of the bird.  Current regulations restrict US breeders’ ability to trade their birds, thus making it difficut to maintain a healthy, genetically diverse population. Without the red tape, breeders would have larger, healthier flocks, which would further help conservation efforts.

A golden parakeets (also known as a golden conure)

On April 10, 2015, the U.S. Fish and Wildlife Service issued a tardy acknowledgement that delisting or downlisting and removing these counterproductive regulations might be warranted. That decision triggered a 12-month deadline, which passed two years ago, with no action from the government.

Frustrated by the federal agency’s stalling, AFA asked PLF for help.  Last year we sued the U.S. Fish and Wildlife Service and the Department of the Interior to push them to follow the requirements of the Endangered Species Act and conduct a legally required 12-month finding, which we believed would result in a better outcome for the bird and for breeders. The federal government responded by settling the lawsuit and agreeing to complete the 12-month review by September of this year. Yesterday, the government delivered on its promise.

The government’s finding proposes reclassifying the species and removing the counterproductive permit requirements.  We will continue to monitor the U.S. Fish and Wildlife Service to make sure it meets its legal requirements going forward.