Nevada bureaucrats: we need to "vet" people before they exercise First Amendment rights 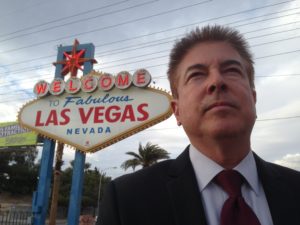 The right to speak freely isn’t just for political candidates; it’s also a central part of the right to earn a living. That’s why PLF’s Economic Liberty Project is in court fighting for Troy Castillo’s right to work as a private investigator without being subject to the Silver State’s arbitrary and discriminatory licensing law. But Nevada bureaucrats have now asked a federal judge to throw Castillo’s case out, on the theory that before someone engages in free speech, he or she has to be “thoroughly vetted” by the government.

Nevada law requires “private investigators” to get licenses, and getting a license requires a background check, fingerprinting, all sorts of financial disclosures–and requires that you maintain a “principal place of business” in Nevada. Yet the law defines “private investigator” as anyone who “investigates” or “furnishes…information” about (among other things!) the “habits,” “conduct,” “business,” “occupation,” “honesty,” “integrity,” “credibility,” “knowledge,” “trustworthiness,” “efficiency,” “loyalty,” “activity,” “movement,” “whereabouts,” “affiliations,” “transactions,” “acts,” or “reputation” of any person. Thus, just about anyone who is paid to research or speak about people—including journalists, historians, teachers, and political activists—is required to get a license, and to maintain an office in the state. (Lawyers enjoy a special exemption. It’s good to be the king.)

As we point out in our brief opposing the government’s motion, such a broad restriction on speech violates the First Amendment. Political activists often research and write about a person’s “reputation.” Journalists “furnish information” about people’s “trustworthiness” or “business.” Genealogists write about their “acts” and “conduct.” And late last year, the state’s Private Investigator Licensing Board tried to prosecute a person for testifying as an expert witness in a lawsuit on the theory that he had acted as an investigator without being licensed. (The State Supreme Court said that went too far.)

Such a broad restriction on speech violates the First Amendment. But rather than admit that this prior restraint on speech violates the Constitution, state officials have asked the judge to dismiss the case on the theory that because investigators deal with “sensitive information,” the state should be able to stop them from exercising their First Amendment rights until the government has “thoroughly vetted” them. And the state claims that the broad definition of “private investigation” is necessary because bureaucrats need to be able to regulate it.

Needless to say, the entire history of free speech–from the days of John Milton to the writing of the First Amendment, to the present–says the opposite. Government has no role prohibiting you from “furnishing information,” or requiring you to be “vetted” first. The Constitution only allows the government to restrict speech in the narrowest of circumstances, and Nevada’s licensing law is anything but narrow.

The law also discriminates against business owners who, like Castillo, are headquartered out of state. It requires entrepreneurs to have their “principal place of business” inside Nevada, and imposes different licensing fees on people based on whether or not they are Nevada residents. Yet the Constitution forbids states from discriminating against businesses located in other states. Challenged on this point, the state has now argued that the discriminatory licensing fees are constitutional because when they were first imposed, in 1987, it would have cost the state more to conduct background checks on applicants from other states. The state admits that the advent of the internet has rendered this notion–if it ever did make sense–obsolete. Yet it still urges the court to dismiss the lawsuit.

Even more remarkably, the state claims it may discriminate against out-of-state residents because Nevada residents “contribute on a daily basis to the Nevada economy.” But this is precisely the theory the Supreme Court has rejected, time and time again. The Commerce Clause, the Privileges and Immunities Clause, and the Equal Protection Clause of the Fourteenth Amendment, forbid states from discriminating in favor of their own residents and against people from other states. As the Court has explained, “Our system…is that every farmer and every craftsman shall be encouraged to produce by the Nation, that no home embargoes will withhold his exports, and no foreign state will by customs duties or regulations exclude them. Likewise, every consumer may look to the free competition from every producing area in the Nation to protect him from exploitation by any. Such was the vision of the Founders.”

You can read the government’s motion to dismiss here; our opposition is here. Nevada gets two weeks to respond, and then the judge will decide whether to hold an oral argument. For more on the case, check out our case video, backgrounder, and our infographic.