Four-year-old boy banned from school for having long hair

Jessica Oates is the single mother of Jabez, a four-year-old boy who was excited to start 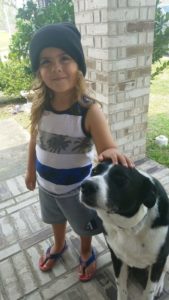 his first day of school. Unfortunately, administrators at Barbers Hill ISD in Texas told the 25-year-old mom that Jabez wasn’t allowed to attend. This wasn’t because Jabez resided in a different district or didn’t have the necessary paperwork. No, the school district banned Jabez from going to pre-K because he is a boy with long hair.

Jabez has been growing his hair since birth, and considers it a part of his identity. Jessica is part Native American, and believes that hair is a symbol of strength. She says she will cut Jabez’s hair the day he asks her to get it cut.

In the past week, over 10,000 people from all over the world asked the school district to let Jabez go to school. Yesterday, Pacific Legal Foundation joined them in urging the school to lift its ban on boys with long hair.

The superintendent of the school district recently said that he would not change “longstanding policies simply to appease.” We hope he will change them to follow the Constitution. It’s time for the school to welcome Jabez with open arms.