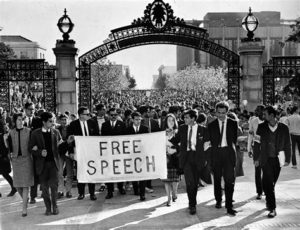 From Berkeley’s Free Speech Movement in the 1960’s

We need to stop telling ourselves that stifling speech is about inclusivity. It isn’t. Yesterday, the New York Times published an article titled “What College Students Really Think About Free Speech,” which analyzed survey data about whether students considered inclusivity or free speech as more important. The results were mixed as students struggled to “balance” these values. The survey, however, suffers from a fundamental flaw: it assumes, wrongly, that free speech and inclusivity are conflicting values. But free speech and true inclusivity are not at odds; in fact, they’re the same thing.

Those who favor stifling certain speech on campus sometimes lean on a bogus premise—that inclusivity requires the school to erect barricades to certain speech. But a careful thinker should see the immediate contradiction in that premise. Inclusivity means allowing diversity of thought. And—vitally—that must include thoughts that many, even most, dislike. Otherwise, the calls for tolerance sound much more like the opposite—a desire to punish and exclude opposing views.

So the survey, by pitting inclusivity against free speech, poses a false dilemma. No wonder students have trouble figuring out how to “balance” these values. Too many of their thought leaders are presenting them with an impossible scenario.

Free speech is inclusivity in its most fundamental state. It is the embodiment of diversity—your ideas, your unique forms of self-expression, are welcome here. Of course, this means that people will feel uncomfortable. But that is, in fact, an inevitable consequence of genuine diversity, as well as perhaps its greatest virtue. Diversity, by challenging us, breaks us free from intellectual and cultural stagnation.

Free speech is at odds with emotional safety, not real inclusivity. Diversity is a challenge that strengthens us. And challenges, by definition, are not safe. A university does its students a profound disservice when it shelters them from disagreeable ideas. The university’s duty is to expose their students to challenge and help them to cultivate the mental toughness necessary to survive in an unforgiving world. As psychologist Jordan Peterson has put it, “It is far better to render Beings in your care competent than to protect them.” Indeed, I suspect that many students feel more offended by the university’s lack of faith in their resilience than by the controversial ideas that they might be exposed to in a truly inclusive environment.

The student survey results cited by the Times may have differed if the right questions were asked. For example, “Do you believe that you lack the strength of character necessary to thrive in an intellectually diverse environment?” Or, “Should your university sacrifice diversity of thought because students lack the resolve to hear and respond to disagreeable ideas?” We need to shed the lie that stifling speech is about inclusivity. Then we might find out “What College Students Really Think About Free Speech.”