FWS dismisses state and local protections of gopher as too flexible 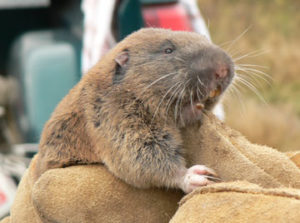 Yesterday, the U.S. Fish and Wildlife Service listed four subspecies of Mazama pocket gopher as threatened under the Endangered Species Act. As PLF explained in a comment letter last year, this listing is inappropriate and unnecessary because it doesn’t recognize the extent to which state and local regulations already protect the gophers. As a result of this listing, more than 1500 acres of land in Washington state will be subject to yet more regulation.

The ESA is designed to avoid an “absurd overabundance of regulation” by including the adequacy of existing regulatory mechanisms as one of the key factors that the Service must consider when making listing decisions. PLF’s letter explained that there are already numerous land use restrictions that protect the gopher. The state has designated the species as threatened and prohibited take. Washington’s Growth Management Act protects the species habitat by identifying and protecting critical areas. A state agency has included the species in its Priority Habitat Program, which it uses to develop management recommendations that local governments implement through individual permitting decisions. In addition to all of these state mechanisms, many of the local governments have adopted ordinances to restrict development near gopher habitat. For example, the city of Olympia restricts development within 1,000 feel of this habitat.

Although the Service acknowledged all of these regimes in its listing decision, and recognized that they have reduced the threat to the gopher, it went ahead with the listing anyway. According to the Service, there regulations are insufficient because they are too allow the state and local governments flexibility in how protections are implemented and because the state doesn’t regulate based on the same subspecies populations that the Service is identifying. This last argument is particularly weak since state regulations are more broad — they regulate all members of the species, not just the four populations the Service is protecting. Local government efforts are also given little weight precisely because they’re local. The Service cites the lack of standardization across localities as a reason to think there is some uncertainty whether the protections are adequate. It’s unfortunate that an agency that regularly lauds its own threatened species regulation as flexible would give little credit to state and local efforts because they’re not rigid.