Last week, the Supreme Court heard 90 minutes of oral argument from four advocates (two on each side) in United States v. Texas, the case brought by 26 states challenging the legality of the administration’s executive actions regarding about four million aliens in the country illegally, including whether they are entitled to certain benefits under the administration’s plan. Based on interviews I’ve given since then, there seem to be some misconceptions regarding what the current legal dispute is about and why it is important.

The lower courts did not rule definitively whether the executive actions were lawful; instead, the district court and the Fifth Circuit Court of Appeals majority held that the states were likely to prevail in their lawsuit, based primarily on a violation of the Administrative Procedure Act, and that the states were entitled to have the executive actions stayed pending the trial on the merits. Although the Supreme Court added a novel question that came closer to addressing the merits of the dispute, the current Supreme Court decision is still about whether the stay is proper—not the final ruling on the legality of the executive actions. 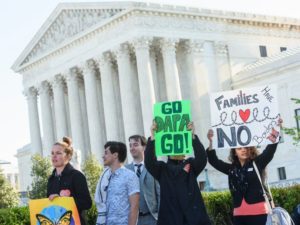 More importantly, however, the case is of great importance regardless of the underlying immigration context. Pacific Legal Foundation does not litigate or take positions regarding immigration law and policy, but we do care about whether the Constitution’s check and balances are being violated, which is what the Supreme Court is really focusing on at this stage. For several years, President Obama explained that he was not king and that he had no authority to grant the type of immigration relief requested without new legislation. Much later, he complained that he was tired of “waiting and waiting” for Congress, and so he announced he “changed the law.” Was he right initially or does he have king-like power to unilaterally change laws he doesn’t like? Does that answer depend on whether the president grows impatient that he might not get what he wants, or was the congressional process supposed to be laborious and force political compromises?

It isn’t just right-wingers who are deeply concerned about the precedent this case will establish. There is no end to unilateral actions liberals would abhor if a forceful GOP president were elected and showed disdain for the separation of powers. Jennifer Rubin’s Right Turn column for The Washington Post summarized the issues well after the oral argument, and allowed me to explain why everyone should be concerned about an abuse of power.  Here is an excerpt:

The court is not deciding the merits of the president’s specific policy choice. “Reasonable people differ on the best immigration policies and how to enforce the laws on the books, but the President’s sweeping, unilateral action to defer deportation of millions of illegal aliens is uniting everyone who is opposed to the presidential abuse of power,” said Todd Gaziano, executive director of the Washington, D.C. office of the Pacific Legal Foundation. “President Obama’s disregard for the separation of powers and his refusal to follow the rule of law as established by the people’s representatives is troubling, regardless of the right immigration policy.” He continued, “Four of eight justices of the Supreme Court today seemed intent on focusing on the violation of the Administrative Procedure Act, which the lower court ruled justified enjoining the President’s action.  While some feared that Chief Justice Roberts might not uphold Texas’s standing to bring the suit, the oral argument today strongly suggested that was not the case.” While conservatives still mourn the loss of Justice Antonin Scalia, in this case a 4-4 tie is good enough. “It is unfortunate that this case is unlikely to generate a majority vote, but those who thought Chief Justice Roberts would bend over backwards to uphold this departure from law saw no evidence of that today,” Gaziano said.

As for the larger issue of immigration reform, advocates of reform understand all too well that legislative action, which is predictable and sustainable from one administration to the next, is the only feasible solution to a broken system. Particularly when immigration is involved and families must make life-changing decisions such as whether to identify themselves, permanence and reliability are essential. Because hundreds of decisions (e.g., in-state tuition, driver’s licenses, eligibility to work) key off of whether an individual is legally present, continual flip-flopping creates havoc throughout the system, at the federal, state and local levels.

Without a legislative solution to this and other knotty policy disputes, government would operate by layering one executive order on top of another without full operation of the legislative process that includes fact-finding, open debate, compromise and amendments. It is a recipe for chaos, and for avoiding the hard work of finally addressing a serious legislative issue. Eventually Congress becomes a useless appendage, incidental to decision-making on the most controversial issues of the day. In an election year, the people can decide what they want to do on immigration and hold accountable those who refused to tackle the matter despite significant economic, security and humanitarian concerns.