The Interview shows why courts should fix the commercial speech doctrine

The Interview, a ridiculous movie about a fictional plot to assassinate the leader of North Korea, made millions this weekend after Sony Pictures decided to release it to those theaters and online stores willing to offer it. Sony’s decision came only after a storm of criticism for its initial decision to withhold the film, caving to threats from hackers linked to North Korea. Before Sony’s one-eighty, even the President had said that the studio’s retreat was a “mistake,” and lamented that allowing a group to censor speech simply because they don’t like the message is wrong and contrary to how we do things in the United States. 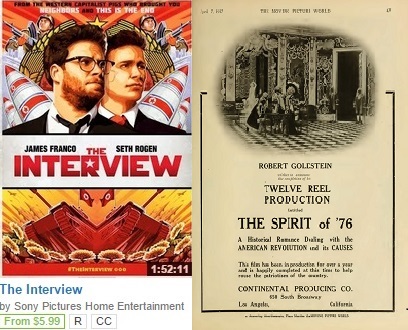 It’s good that the president recognized that we shouldn’t censor ourselves just because of threats from hackers and terrorists. But that same principle should also convict him that our own government needs to change. As filmmaker Ron Maxwell wrote recently, the U.S. government has its own history of censoring movies ranging from political pressure to outright imprisonment.  For example, 1917’s The Spirit of ‘76 won its director three years in federal prison for violating the Espionage Act, because it included “anti-British propaganda” and the U.S. had just allied itself with Britain in the First World War.

Whether movie censorship like this occurs today is a matter of debate, possibly coming in the form of political pressure or selective prosecution. But where other forms of speech are concerned, government regularly and overtly punishes individuals for speech.

The government heavily regulates so-called “commercial speech”—speech that proposes a commercial transaction. That’s because the Supreme Court has said that even truthful, non-obscene advertisements receive less protection under the Constitution than other types of speech. Under a 1980 case called Central Hudson Gas & Electric Corp. v. Public Service Commission, the government may impose limits on a person’s right to advertise if the government has a “substantial” reason for doing so, and its regulations directly advance that reason without restricting much more speech than necessary.

So for example, while the content of a movie normally receives full First Amendment protection, an advertisement that a theater is selling tickets to that movie will probably be treated as commercial speech and subject to more government censorship. As the past week demonstrated, this does not make sense.  The ability of those theaters willing to show The Interview to communicate their desire to sell tickets was just as important as their right to show it at all.  While our government did not try to stop the providers’ commercial speech in this case, it has interfered when businesses try to criticize our government.

For example, in Spirit Airlines v. U.S. Department of Transportation, the U.S. Court of Appeals for the D.C. Circuit upheld a federal regulation that prohibits airlines from “prominently” displaying the taxes that government adds to a ticket price. Thus airlines could not draw attention to what they considered excessive taxes. Even though the First Amendment protects everyone’s right to speak about and protest taxes, the court held that the regulation was constitutional because commercial speech enjoys less protection.

The ability to speak about commercial transactions touches our lives every day, allowing movie stars and ordinary people alike to not only make a living, but to get information about goods or services they want to buy. That’s why PLF took Scott McLean’s case when the City of Alexandria fined him for placing a simple “For Sale” sign on the window of his otherwise legally parked car. It may seem trivial to protest a law that is only punishable by a $40 fine, but the right to free commercial speech is not. No one knows this better than another PLF client, John Tomaso, who learned the hard way that a simple sign advertising a desire to buy gold could land his small business up to $10,000 in fines.

Laws that censor commercial speech must change and we have reason to hope that one day courts will agree. In 1917, the director of The Spirit of ‘76 went to prison, because according to Supreme Court precedent at that time, the First Amendment did not apply to movies at all. Why? Because they were “commercial” in nature. The Supreme Court later overruled that absurd decision in 1952.  Let’s hope the commercial speech doctrine will soon face a similar fate.