The Minnesota State High School League (MSHSL) governs interscholastic sports in Minnesota. It creates the eligibility criteria for sports, establishes the rules, governs sportsmanship, and is in charge of officiating. One of the sports it oversees is competitive dance, and according to its bylaws, only girls are allowed to participate in that sport.

Last year, as a freshman, Kaiden made the the Spartan Dance Team. He practiced with his team twelve hours a week. He learned the routines. In December, he traveled with the team to the conference championship. He donned his costume, and was ready to go compete with his teammates. It was at that time, that MSHSL officials informed his team that Kaiden would not be able to participate because he is a boy.

Kaiden was crushed. He had been dancing all of his life.  He had often been bullied and teased for choosing to be a dancer, but he persevered. When he reached high school, and was welcomed as part of the dance team, he finally felt like he belonged. But MSHSL took that sense of belonging away. According to it, dance is a girls’ sport, and Kaiden can’t compete.

This morning we sent the Minnesota State High School League this letter explaining why its prohibition on boys competing in competitive dance is unconstitutional. If MSHSL does not rescind its policy that prohibits boys from competing in varsity dance, PLF will file a lawsuit on behalf of Kaiden Johnson challenging the constitutionality of its girls-only dance policy.

As Kaiden explains in the video below, we are doing this not only to get justice for Kaiden, but for all Minnesota kids who just want the same opportunity to compete in the sport they love.  That’s why Kaiden is willing to forgo litigation if MSHSL does the right thing. Out-moded stereotypes of what sports boys should play and what sports girls should play have no place in our schools in 2017. Everybody deserves equal opportunity. Let Kaiden dance. 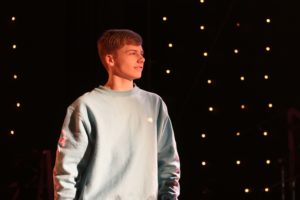