PLF client Joe Robertson lives deep in the Montana woods at the edge of a national forest, an area increasingly prone to destructive, life-threatening fires. The only available water supply to fight fires near his property is the couple of garden hoses of flow in a foot-wide, foot-deep nameless channel that flows through a clearing near his home. Joe and his wife ran a fire fighting support truck business, and he knew that the protection of his property would depend on a better water supply. So in 2013 and 2014 he dug some small ponds in and around the channel, so that multiple water trucks could get in and fill up. The ponds slowly filled up, and then the water flowed out the bottom one and rejoined the channel. 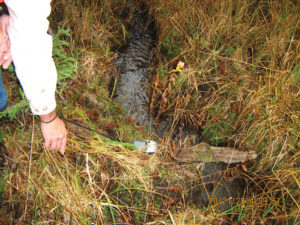 Then, the EPA showed up and claimed that the foot-wide, foot-deep nameless channel (pictured here) is a federally protected “navigable water,” even  though it is more than forty miles away from the nearest river that is actually, well, navigable. EPA said that Joe needed permission from the Army to dig the ponds. The federal government criminally prosecuted him, and at age 77 he was sent to prison for 18 months.

With PLF’s help, Mr. Robertson appealed to the Supreme Court today, asking to overturn his Clean Water Act conviction. We argue on his behalf that the Clean Water Act is unconstitutional because it fails to provide adequate notice to the ordinary citizen of what “navigable waters” are. No reasonable person would think that a narrow ditch you could step over with a normal stride is a federally protected commercial waterway. Yet that is the government’s claim in this case. Nobody should have to face prison for incorrectly guessing what the government thinks is navigable.