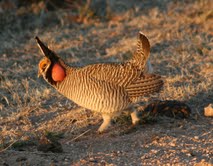 Today, the U.S. Fish & Wildlife Service formally removed the lesser prairie chicken — a species widely distributed across Colorado, Kansas, New Mexico, Oklahoma and Texas, including key areas for energy development — from the Endangered Species Act’s threatened list. The delisting was the result of a lawsuit against the agency, challenging its decision to give short shrift to voluntary conservation programs developed by states and private landowners. After losing in the district court, the Service decided to forego its appeal.

So where does this leave the species?

Radical environmental groups are shrieking that the sky is falling. (You had to see a Chicken Little reference coming eventually, right?) According to a 2015 aerial survey, there are approximately 25,000 of the birds. This is a slight decline (~13%) from the year earlier, but the surveyor notes that this is an inexact science and the difference is not statistically significant.

According to the Western Association of Fish & Wildlife Agencies, these seem to be benefiting the bird. In 2013, before the conservation efforts were undertaken, there were only about 17,000 members of the species. In 2014, that number spiked to nearly 30,000, though most everyone recognized that increased rainfall in the region inflated that number. In 2015, the most recent survey, the population fell slightly, but remains well above where it started three years ago.

It’s deeply ironic that several environmental groups have seized on this one year dip to argue that voluntary conservation programs don’t work, since their preferred alternative has an even more dismal record. As we’ve regularly noted, the Endangered Species Act’s record of recovering species is extremely disappointing. In the 43 years since it was enacted, less than 2% of listed species have recovered to the point that they could be delisted. In fact, nearly as many species have been delisted because they’ve gone extinct or the original listing was in error. With the statute having such a long, unaccomplished track record, why would anyone want to give up on a program that has had positive results overall, simply because of a one-year setback?